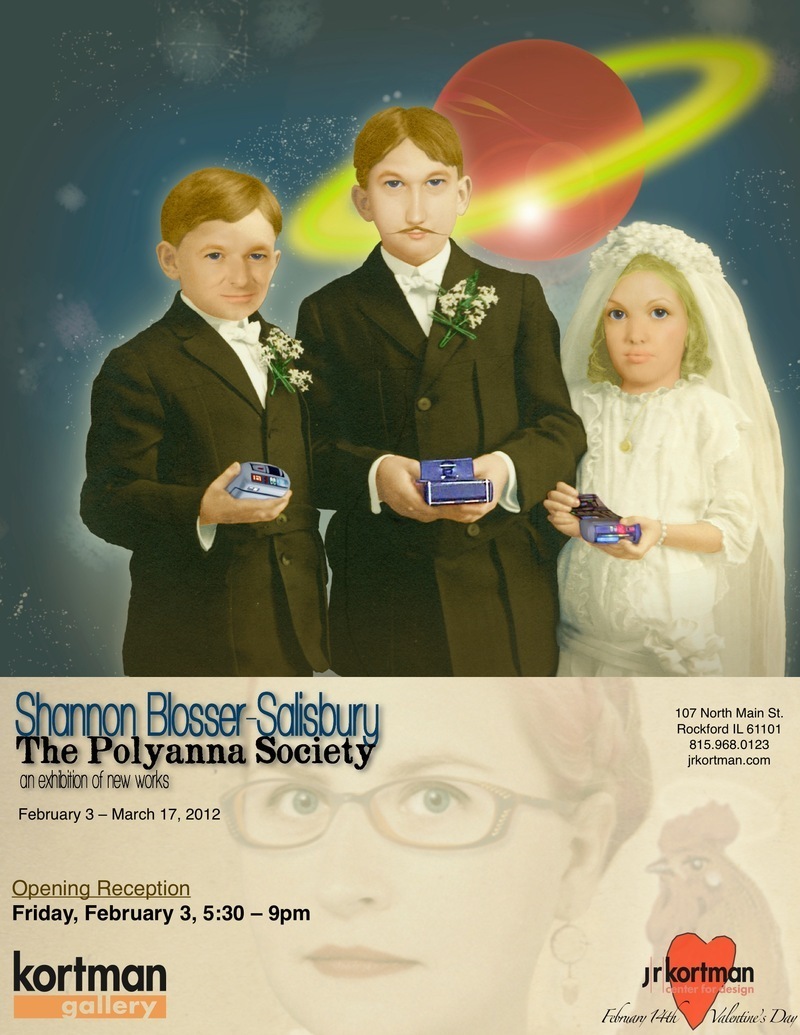 Shannon Blosser-Salisbury exhibits
‘strange’ digital images at Kortman Gallery
Shannon Blosser-Salisbury, as an artist, does not leave well-enough alone. Normal people from vintage photos are digitally fused with her own photography to create strange and compelling images.  These intriguing and improbable pictures can be seen Friday, February 3rd when “The Pollyanna Society,” an exhibit of new works by Blosser-Salisbury opens in the Kortman Gallery.
Blosser-Salisbury approaches her work with a sense for the peculiar and outlandish and with a sense of humor.
“I first began torturing antique photographs in 2007,” says Blosser-Salisbury. “At first, I did it for my own amusement, but when I started showing the finished pieces to friends, I heard comments along the lines of, ‘You’re sick!’ Well, there is nothing I could do but make more.”
Her images can take between several days and weeks to complete. The result is digital collages composed of antique photos and contemporary elements that become their own little fantasy worlds.
“There’s a little bit of darkness in each of these worlds,” says Blosser-Salisbury. “but I’m a Pollyanna, so the good side always triumphs.”
According to Doc Slafkosky, gallery director, Blosser-Salisbury’s work is hard to describe. “You really have to see Shannon’s strange and eccentric works,” Slafkosky said. “They seem weird at first glance, but when you take a longer look at them, they become even weirder...but at the same time, lots of fun! If anything, they are highly visual, colorful, and best of all, oddly entertaining.”
The opening reception for “The Pollyanna Society” exhibition by Shannon Blosser-Salisbury will be Friday, February 3rd from 5:30 to 9pm.  The gallery is located upstairs at J. R. Kortman Center for Design, 107 North Main Street. For further information call 815/968-0123 or visit www.jrkortman.com.
What: “The Pollyanna Society” an exhibition of new works by digital artist
Shannon Blosser-Salisbury
When: Opening reception: Friday, February 3rd, 5:30 to 9pm. Gallery & Store open
Monday to Saturday, 10am – 6pm.
Where: Kortman Gallery, upstairs at J. R. Kortman Center for Design,
107 North Main St.
Admission: Free
If you're seeing this on our website, you can see more images of works by Shannon Blosser-Salisbury by clicking on the "Current Show" option under Kortman Gallery or visit www.kortmangallery.posterous.com. 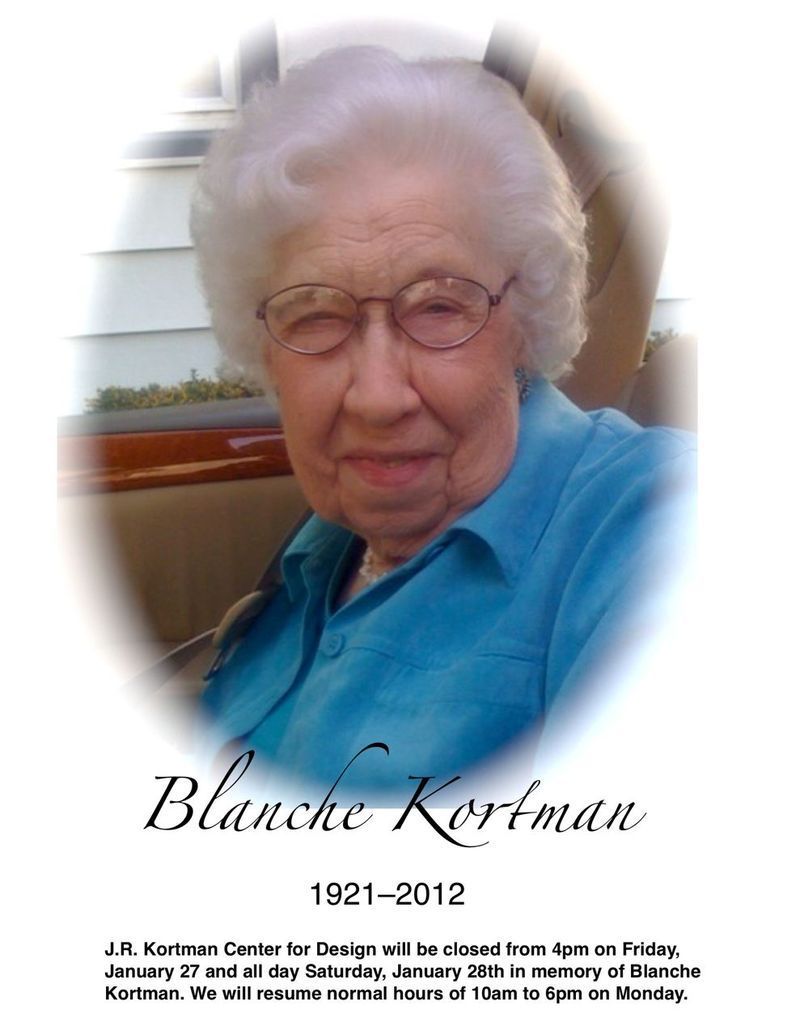 The Kortman Gallery is pleased to extend "The Wright Inspiration: Art, Design, and the Laurent House" through Saturday, January 28th. "The positive response to this exhibition has been overwhelming," said Doc Slafkosky, gallery director. "Frank Lloyd Wright has lots of fans. People seem to be drawn to his work and very intrigued and beguiled by the Laurent House. And when you combine that with art inspired by Wright's design sensibility you have something worth experiencing."According to Slafkosky the exhibit is the most attended art show in the gallery's 25 year history. The exhibit features works by 16 Rockford artists, plus images and background information on the Laurent House, Rockford's only Wright designed residence.
This is the second extension of the "Wright" show. The gallery is slated to be painted sometime in January. Until that painting time is scheduled we will keep the "Wright" show in place. For details you can call us at 815.968.0123 or email jerry@jrkortman.com. A new exhibition featuring the works of artist Shannon Blosser-Salisbury will open Friday, February 3rd. 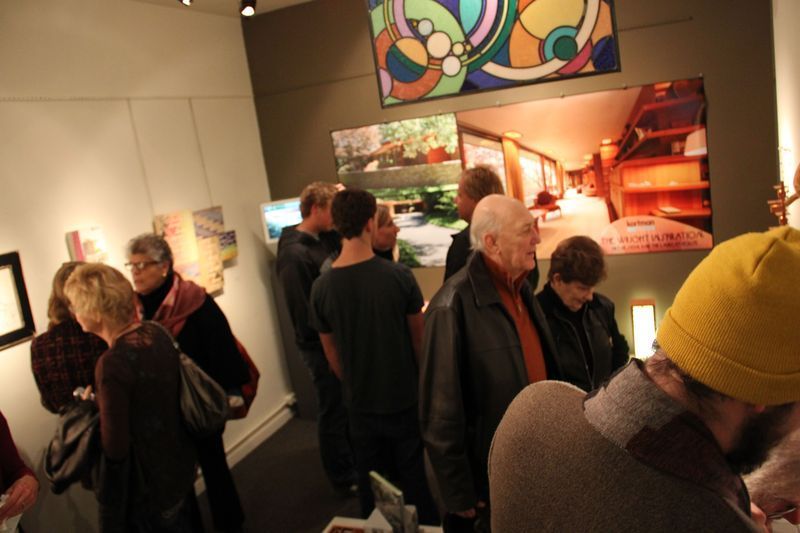 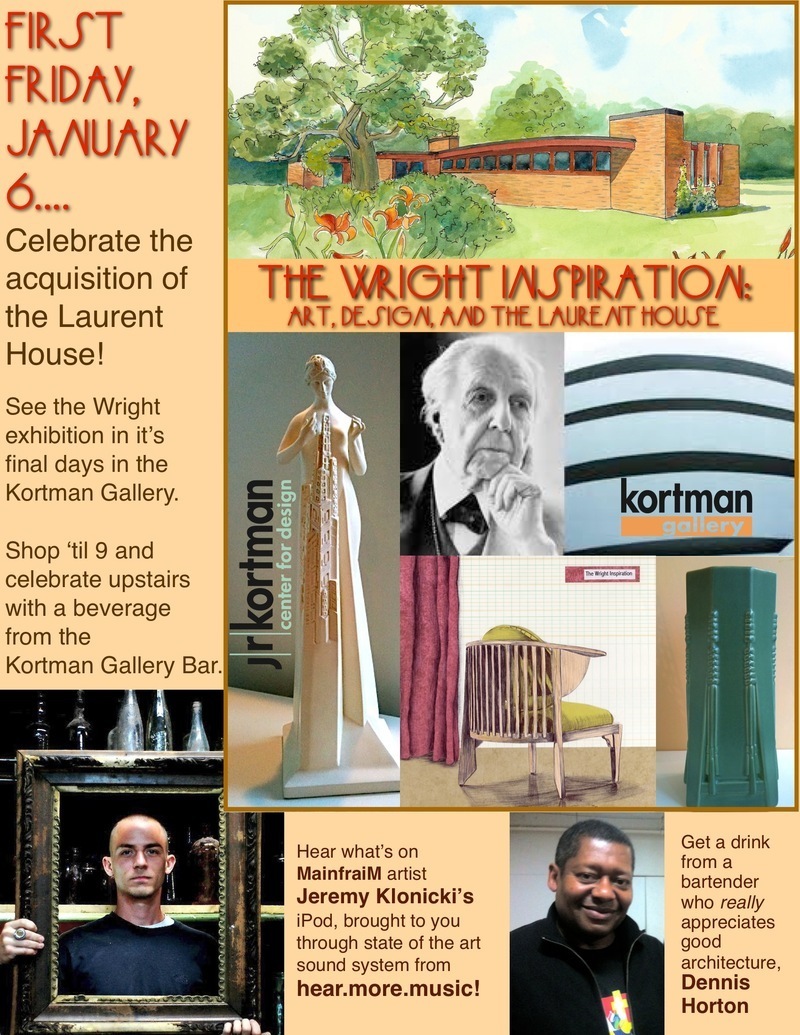 This First Friday, January 6th come celebrate the acquisition of the Laurent House by the Laurent House Foundation which will maintain it as an architectural treasure for all of us to enjoy into the future. We will keep the bar open late and really make it a party with music from artist Jeremy Klonicki's unedited & random iPod playlist. Jeremy's music will sound great being played through a cool sound system from hear.more.music! And we'll keep the store open so you can shop 'til 9pm and still enjoy the party upstairs in the gallery as Dennis Horton keeps the Gallery Bar jumpin'. See you First Friday! 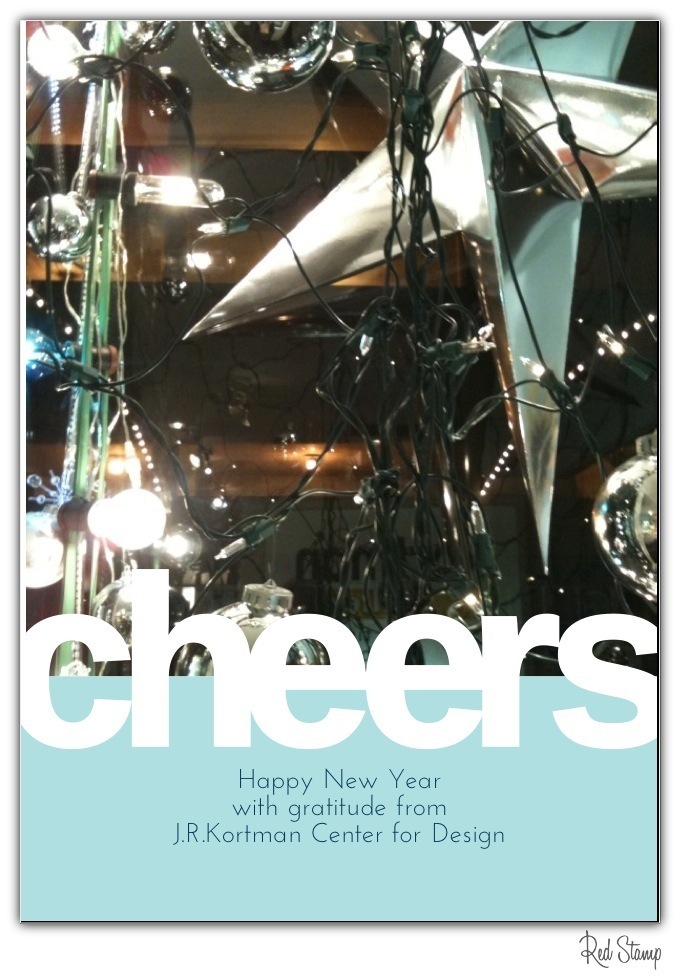 All of us at J.R. Kortman Center for Design would like to thank you for a fun and fantastic holiday season! We will close for a New Year's break @ 4pm on Saturday, December 31 and take a much needed long holiday weekend. We will reopen to normal hours of Monday through Saturday, 10am to 6pm on Tuesday, January 3.
Stop by then for the final days of "The Wright Inspiration: Art, Design, and the Laurent House" in the Kortman Gallery. We will celebrate the successful acquisition of the Laurent House on First Friday...the bar will be open and we will reveal another unedited playlist of some interesting personalty...maybe even Frank Lloyd Wright's iPod...if we can locate it!
HAPPY NEW YEAR...have great 2012! 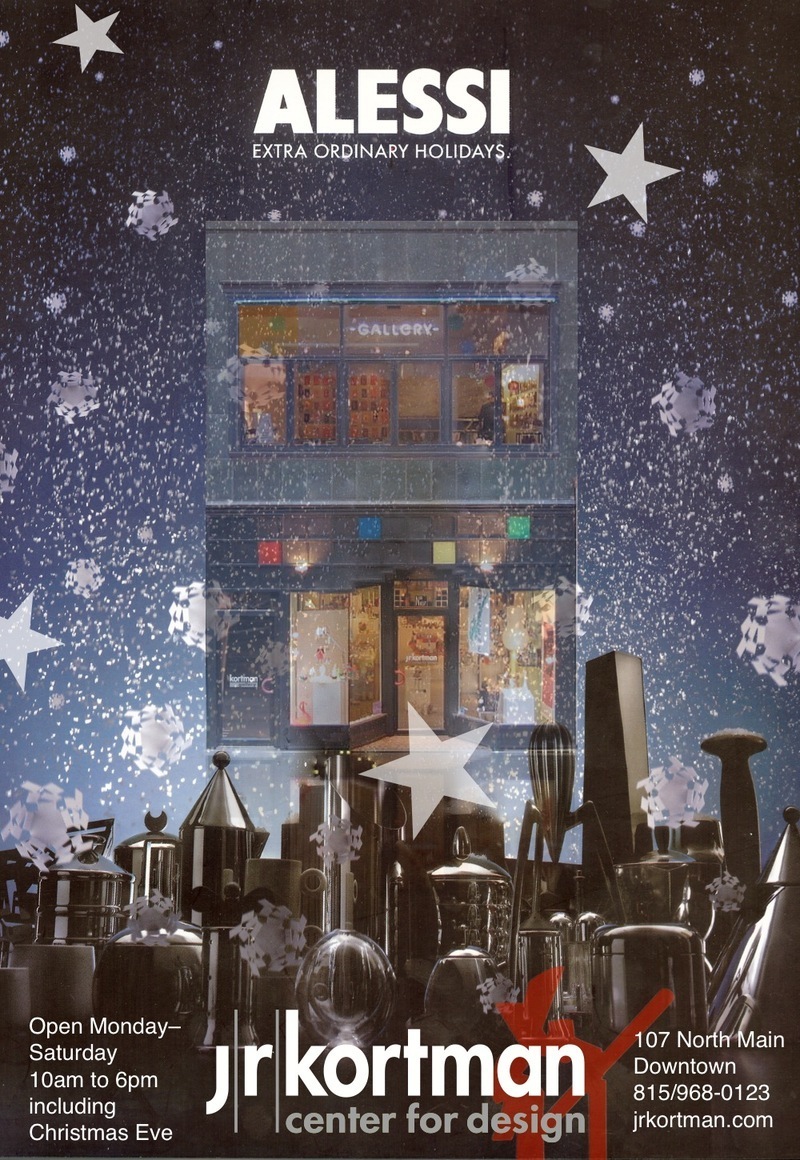 J. R. Kortman Center for Design presents the beauty, the quality and the great design from Alessi....functional objects of exceptional design...which make lasting gifts for an Extra Ordinary Holiday. The best gifts from sophisticated watches to unique jewelry to folk art to fine art to great books on art, design, and popular culture. And, of course interesting toys that guarantee big fun for all kinds of kids. The video below is a message from Santa Claus....play the video and hear what Santy has to say... 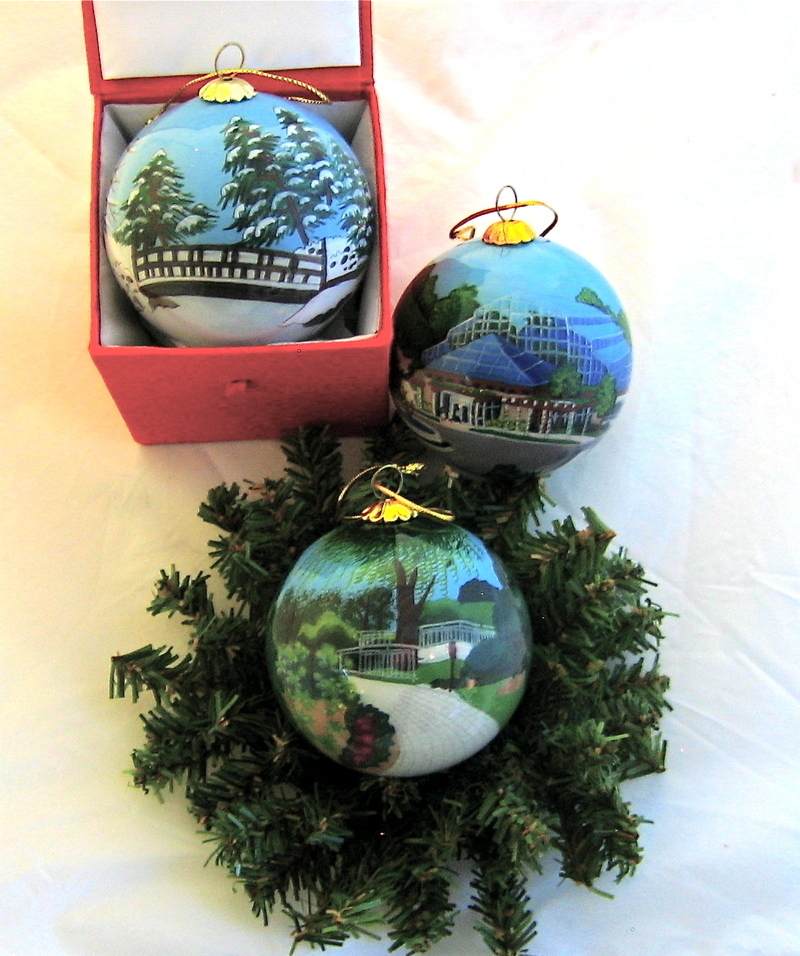 An image of the bridges of La Paloma Gardens has been selected as this year’s addition to the Rockford Landmark hand-painted ornaments collection from J. R. Kortman Center For Design. Also featured this year is a second-edition version of the Nicholas Conservatory which recently opened in Sinnissippi Park.
La Paloma Gardens, located in northeast Rockford, is owned and meticulously cared for by Rockford artist and philanthropist Karen Harding. La Paloma, Klem Arboretum, Nicholas Conservatory, Sinnissippi Gardens along with Anderson Gardens are good reasons for Rockford to take on the moniker of City of Gardens.
“Even though La Paloma is a privately owned garden, it has been the site of many cultural and special community events including Rockford Art Museum’s Art in the Garden, annual garden walks, as well as many prominent wedding celebrations,” said Doc Salfkosky, co-owner of J.R. Kortman Center for Design.
“We had another edition of the Nicholas Conservatory created because of popular demand. There is much excitement now that the spectacular superstructure of the conservatory is now a part of our river front landscape,” says Slafkosky.
The Downtown Rockford design store/gallery has been creating new ornaments every year for more than decade.
Also in the collection is a special edition of Memorial Hall, the Woodward Governor building, and the North Main Street Armory. Other ornaments available in the Landmark Collection include “Guardians of the Rock” Sculpture by Theresa Agnew, the Beattie Park Gazebo, Sinnissippi Lagoon, the Rockford News Tower, the Faust Landmark Building, Coronado, and Midway Theater Buildings, and the Coronado stage, Sinnissippi Bur Oak tree, Old City Hall, and “Symbol” sculpture, the best selling ornament in the collection.
“Other top sellers include four ornaments depicting different scenes of the beautiful Anderson Japanese Gardens,” says Salfkosky.
In addition to the Swedish Historical Society’s “Erlander Home,” other historic houses in the collection include the  “Limestone Mansion,” home to the Community Foundation of Northern Illinois,  and the “Cobblestone House,” located at 2127 Broadway, one of Rockford’s oldest houses.
All the Landmark ornament images are individually hand-painted on the inside of a glass sphere, utilizing an ancient Chinese technique originally applied to “snuff” bottles. Each collectable ornament is a miniature work of art.  All ornaments are priced at $22 each. 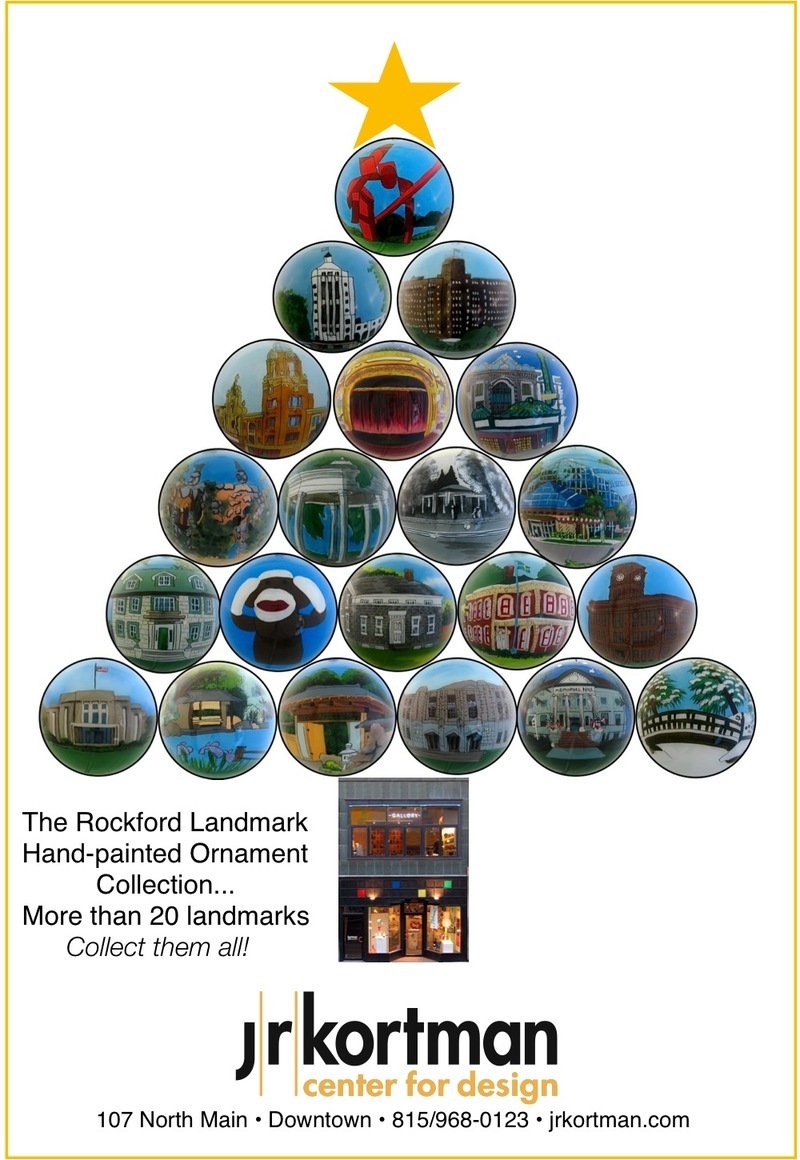 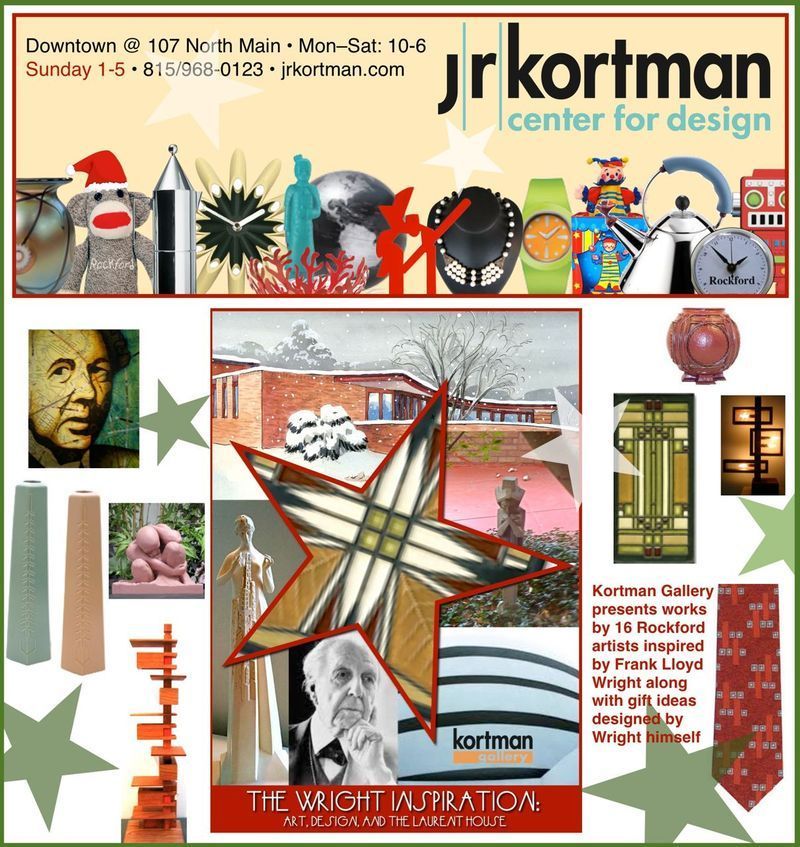 Here is an iPhone photo tour of  J. R. Kortman Center for Design...fun shopping for the holidays! We're open Monday through Saturday 10am to 6pm or later by appointment...and Sundays 1 to 5 (in December). Hope these pictures give you great gift ideas...stop in and experience the store and Kortman Gallery where you can see the "The Wright Inspiration: Art, Design, and theLaurent House" exhibiton. To see images of the Wright exhibition click on "Current Show" option under Kortman Gallery on the left or go to www.kortmangallery.posterous.com. 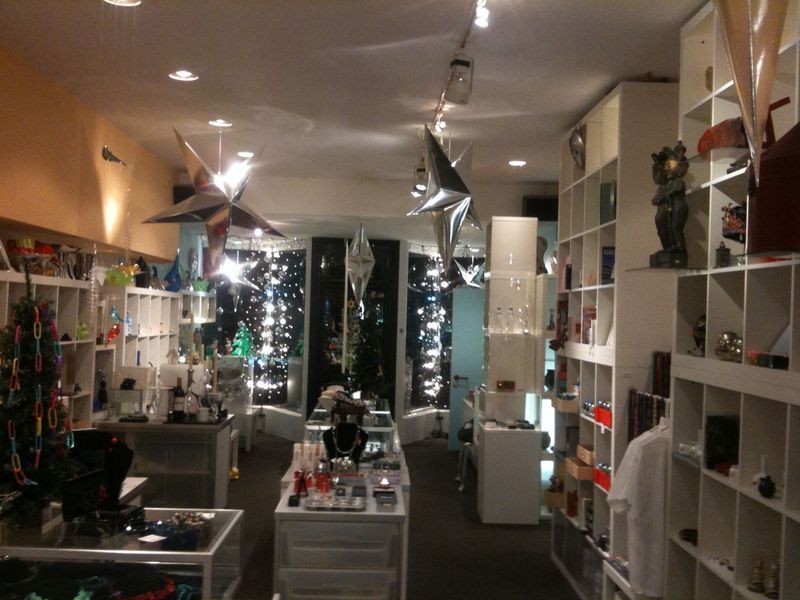 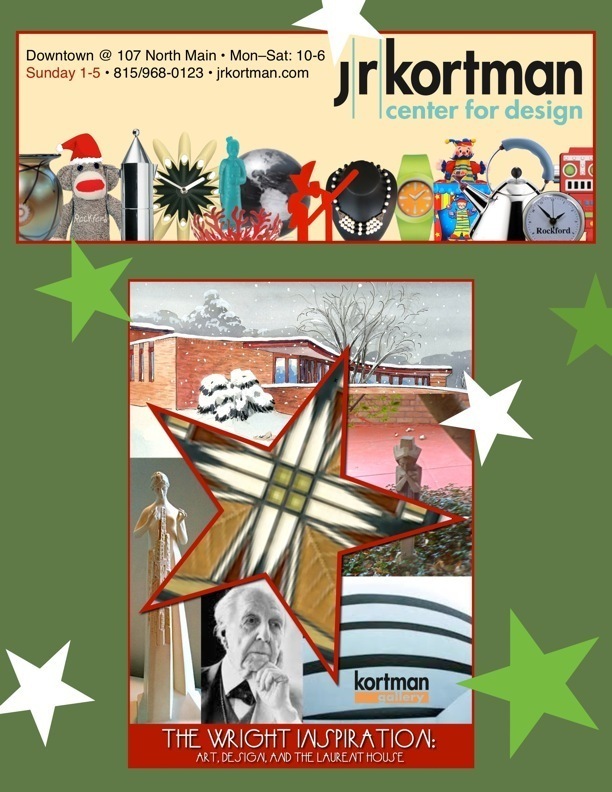 Can't beat the ambience of Christmas in the city....ice skating in Davis Park...cozy dinner by the fire at Abreo...a beer with friends at Carlyle...casual, fun food at Octane...and the Downtown classic Irish Rose...and most of all shopping for the best gifts at J. R. Kortman Center for Design and experiencing the Kortman Gallery surrounded by the "Wright Inspiration: Art, Design, and the Laurent House" exhibit.
We're open Sundays in December, 1 to 5pm!
Have a great holiday season! 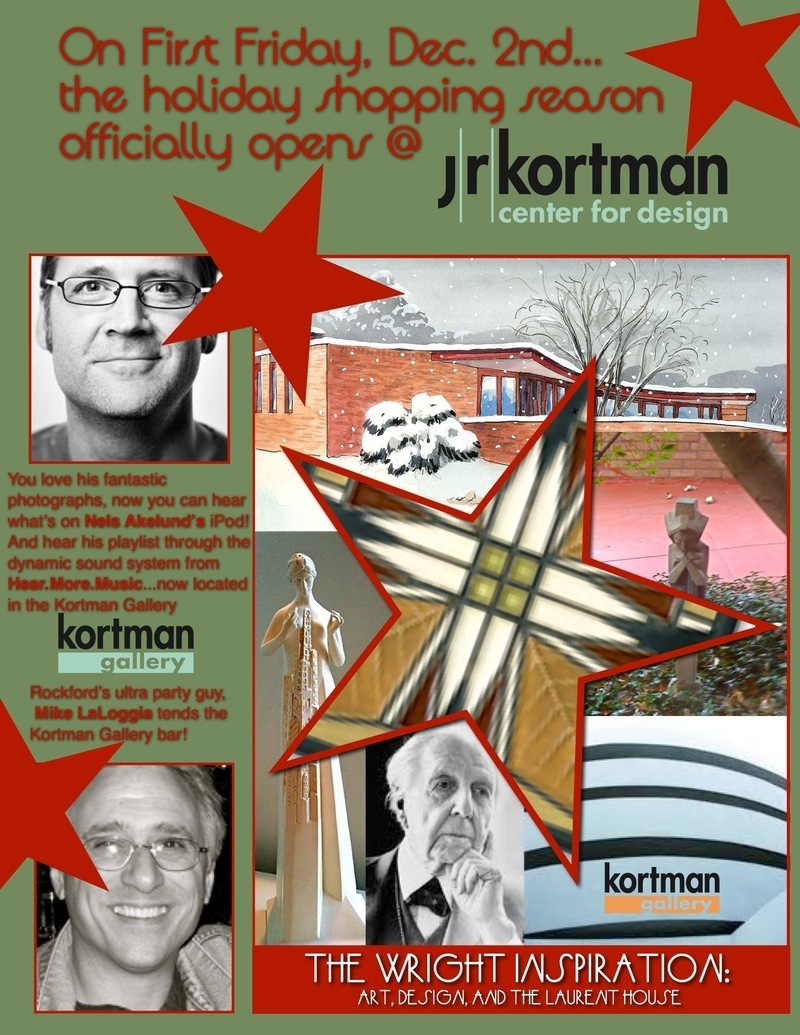 December's First Friday (Dec. 2nd) marks the official opening of the holiday shopping season at J. R. Kortman Center for Design. Lights will be twinkling, stars will be shining, and the store will be filled with compelling and magical gifts. The Kortman Gallery bar will be open upstairs so you can enjoy the "Wright Inspiration: Art, Design, and the Laurent House" exhibit over a relaxing beverage while listening to the unedited playlist from one of Rockford's grandest photographers, Nels Akerlund...and enjoy the music through the cool and cutting edge technology of the sound systems rom Hear.More.Music....now located in the "Kortman Gallery of Sound." And Rockford's ultra party guy, Mike LaLoggia will keep it all together tending the Gallery Bar.  This is just the start of a happy 26th holiday season from J.R. Kortman Center for Design!