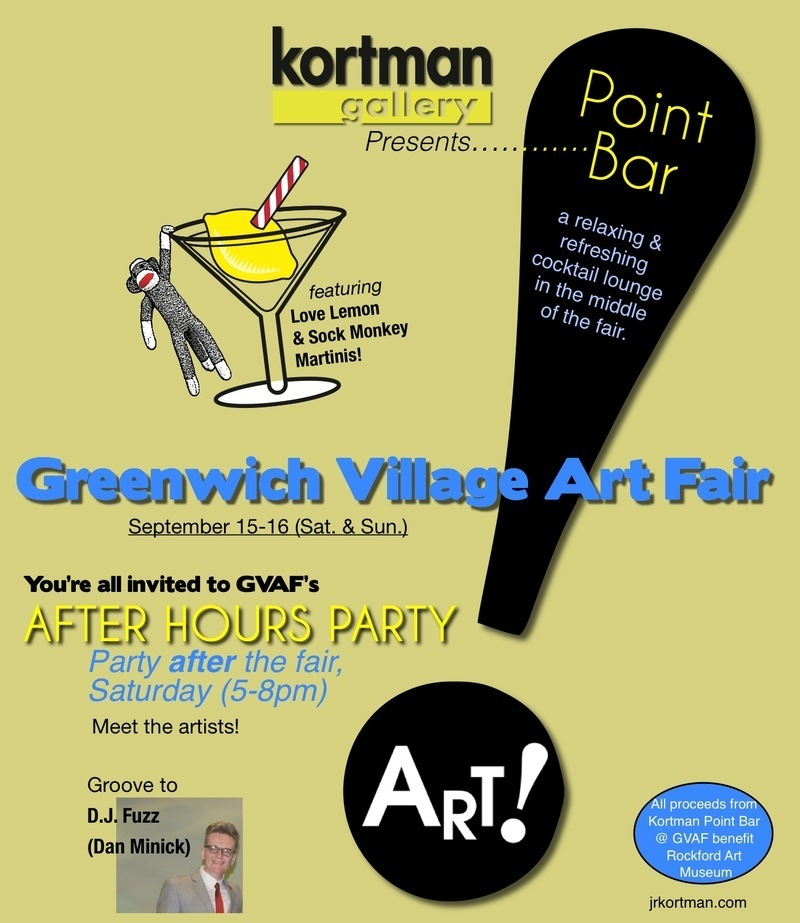 Once again, Kortman Gallery presents Point! Bar at the 64th annual Greenwich Village Art Fair on the grounds of the Rockford Art Museum at Riverfront Museum Park, Saturday & Sunday, September 15 & 16. Point! Bar will be featuring art fair favorites...Love Lemon & Sock Monkey martinis along with Bloody Mary’s, Screwdrivers, and other vodka favorites served up from our “cocktail lounge” situated right in the middle of the fair. While enjoying the great art from over 100 artists, stop by for a relaxing drink. And on Saturday evening, everyone is invited to Point! Bar’s After Hours Party from 5pm to 8pm featuring D. J. Fuzz (Daniel Minick) “spinning” the coolest tunes. This is a chance to unwind after the fair, show off your art purchases, and mingle with the artists. Featured bartenders include Dennis Horton, Chris Doyle, Michael LaLoggia, and Tim Stotz. Looking forward to seeing you at the fair! 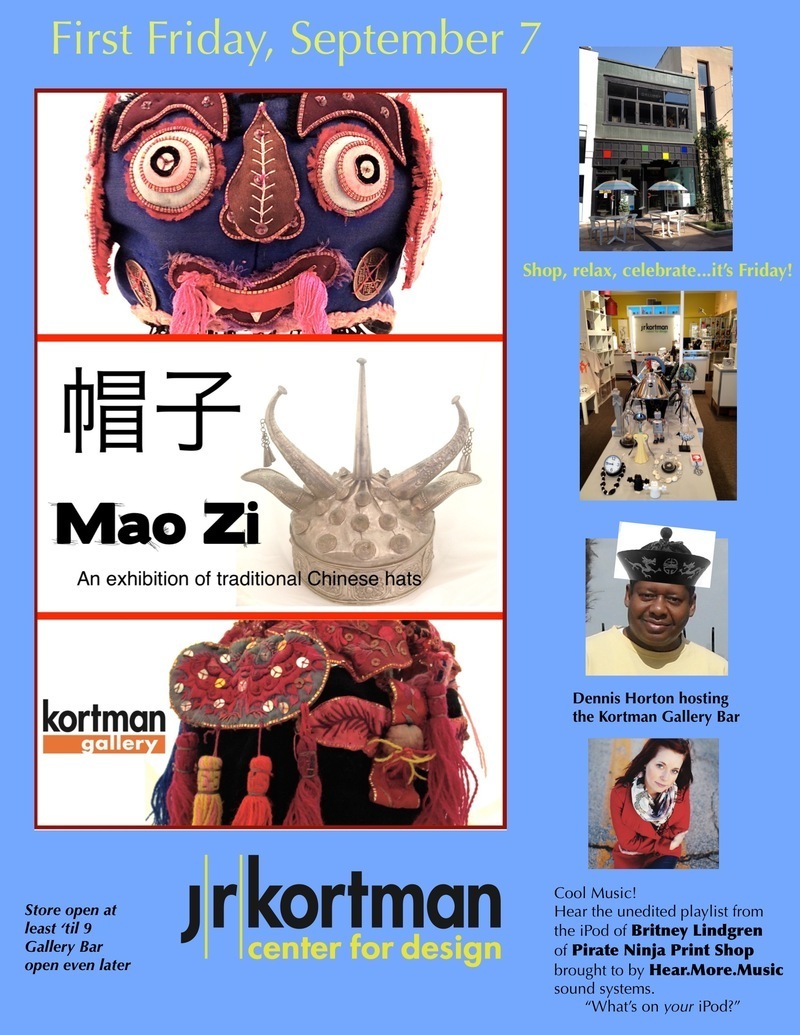 First of all, we would like to thank everyone for a fun and successful On The Waterfront weekend! However, if you didn’t come downtown for OTW, come down this First Friday evening (September 7) and stop by the store and relax upstairs over a refreshing drink from bar host Dennis Horton @ the Kortman Gallery Bar. And while in the gallery, you can see “Mao Zi: an exhibition of Chinese hats.” This show will run through the end of September. The hats, which are little collectable works of art, would also make great holiday gifts.
And to keep the party going, we are featuring cool music from the unedited playlist from the iPod of Britney Lindgren of Pirate Ninja Print Shop. Britney & Jarrod are a creative force in Downtown’s burgeoning cultural scene. Britney’s iPod will be played through a great sound system by Hear. More. Music.
And if you are still looking for more downtown fun...all during the day Saturday is the Screw City Beer Festival happening right here @ State & Main Street. J. R.Kortman is within festival grounds, so stop in if your attending the beer fest. Non-festival goers will still have access to our store.
And next weekend (September 15 & 16) is the 64th annual Greenwich Village Art fair on the grounds of the Rockford Art Museum. We will be there with the Kortman Gallery “Point Lounge” serving our signature drinks...the Love Lemon & Sock Monkey martinis...for the benefit of RAM.
Hope we see you at all or one of these great events! 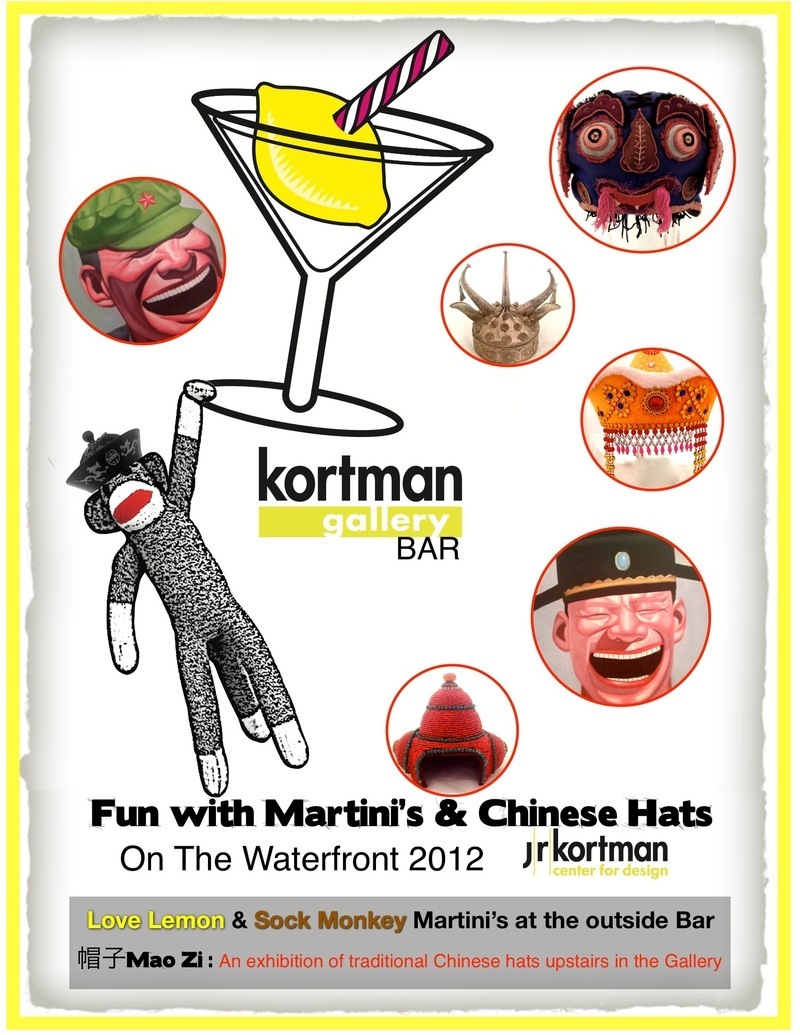 Making their triumphant return to the Kortman Gallery outside bar, the Sock Monkey Martini™ and the now classic Love Lemon Martini™ will once again be the featured cocktails as this year’s On The Waterfront’s favorite martini. The Love Lemon Martini™ was inspired by a festival kids’ treat that was served years ago at “Beattie Is...” (back in the ’70’s) and Rockford Art Museum’s “Greenwich Village Art Fairs”. The idea was to suck the juice from the lemon through the peppermint stick. The stick not only sweetened the juice but added a cooling sensation.

But the Love Lemon Martini™ is a very adult treat... refreshingly delicious, consisting of vodka, Limoncello (an Italian lemon liqueur), and fresh lemon juice garnished with a slice of lemon pierced by a peppermint stick.
The sock monkey, Rockford’s unofficial mascot and party animal is the inspiration for this playful adult cocktail...the Sock Monkey Martini™.  A blend of coconut vodka, creme de cacao, banana liqueur, laced with chocolate syrup and garnished with a cherry, the Sock Monkey Martini will make you go bananas for another one!
Also featured at the Kortman Gallery Bar will be Miller Lite, Blue Moon, Amstel Light and Heineken beers along with a selection of wine and soft drinks.
Also, this year the Kortman Gallery is presenting a visual treat for the entire family...Mao Zi: An exhibiton of traditional Chinese hats. Most of the hats on exhibit are older, representing colorful folk art and provincial traditions, while some of the hats are newer, influenced by the cultural revolution. Paintings and sculptures influenced by Chinese artist Yue Minjun are also included in the show. These treasured hats are collectable little  works of art and are available for purchase.
To celebrate this exhibit during On The Watefront, the store will also be selling fun, colorful Chinese party hats that can be worn while sipping our signature martini’s or to show off throughout the festival.
Stop by the Kortman Gallery Bar and relax in our tent, or should we say, our Main Street lounge...see you Labor Day Weekend, On The Waterfront ’12, downtown Rockford.
Note: The Kortman outside bar and upstairs gallery will be open Friday evening at least ‘til midnite and Saturday & Sunday from 2pm at least ‘til midnite or later depending on demand. Due to the festival, store hours may vary...please phone ahead 815-968-0123 for more information. 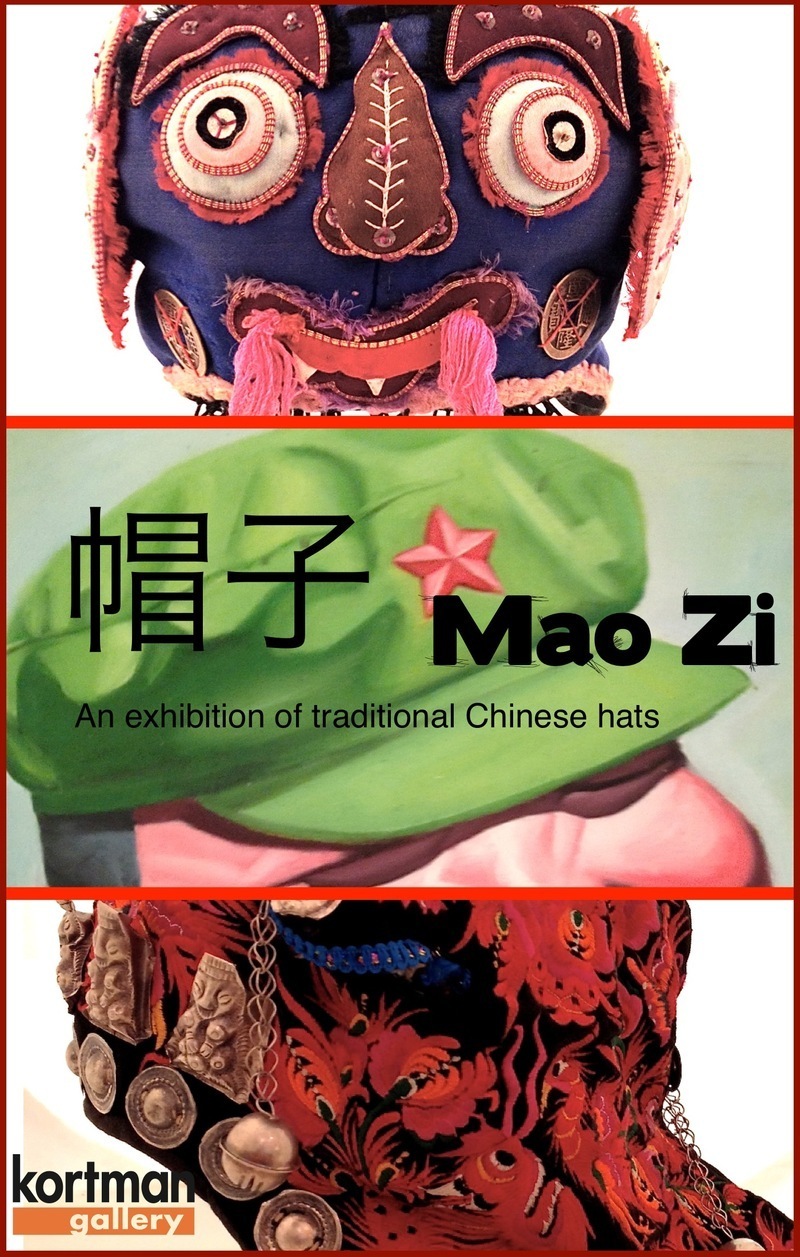 “Mao Zi: an exhibition of traditional Chinese hats” opens on Friday, August 3rd in the Kortman Gallery in Downtown Rockford. The colorful, mostly hand-made hats represent different periods and provinces of China. Mao Zi is the Chinese term for hat.
“As in most cultures, hats tell a story or represent social status or even express ceremony or celebration,” says gallery director Doc Slafkosky. “Many of the hats on display are hats created for children by family members, so you could even say that hats represent family endearment.”
Most of the hats on exhibit are older, representing colorful folk art and provincial traditions, while some of the hats are newer, influenced by the cultural revolution. Also included in the show are painting and sculpture replications influenced by Chinese artist Yue Minjun that feature hats.
“These hats are not only little works of art, but personal objects. This exhibit presents a chance to get a first hand glimpse, both visual and tactile, of the culture of this vast and compelling country,” Slafkosky said. “Gallery patrons are welcome to touch the hats’ fabrics and other decorative materials.”

An opening reception for “Mao Zi: an exhibition of traditional Chinese hats” will be Friday, August 3rd from 5:30 to 9pm which coincides with First Friday Downtown. The hats will be on display through September 8th, 2012.  The gallery is located upstairs at J. R. Kortman Center for Design, 107 North Main Street. For further information call 815/968-0123 or visit www.jrkortman.com. 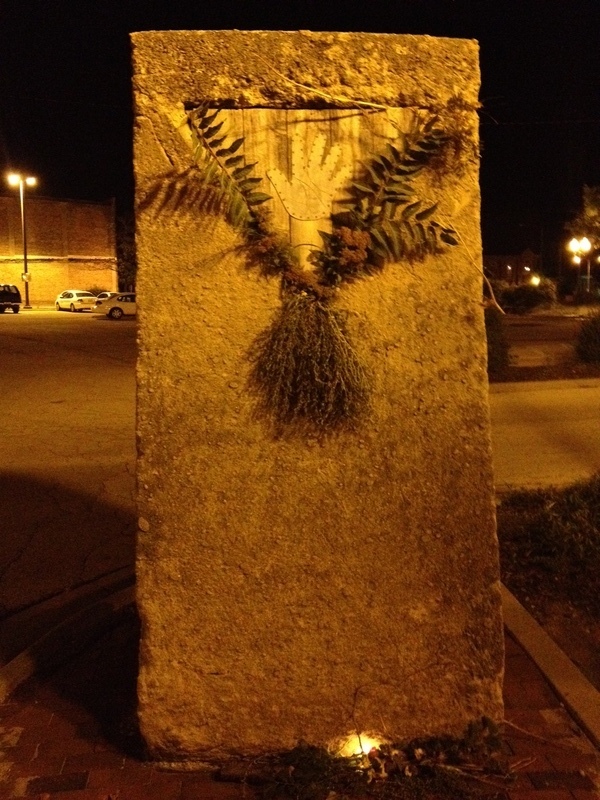 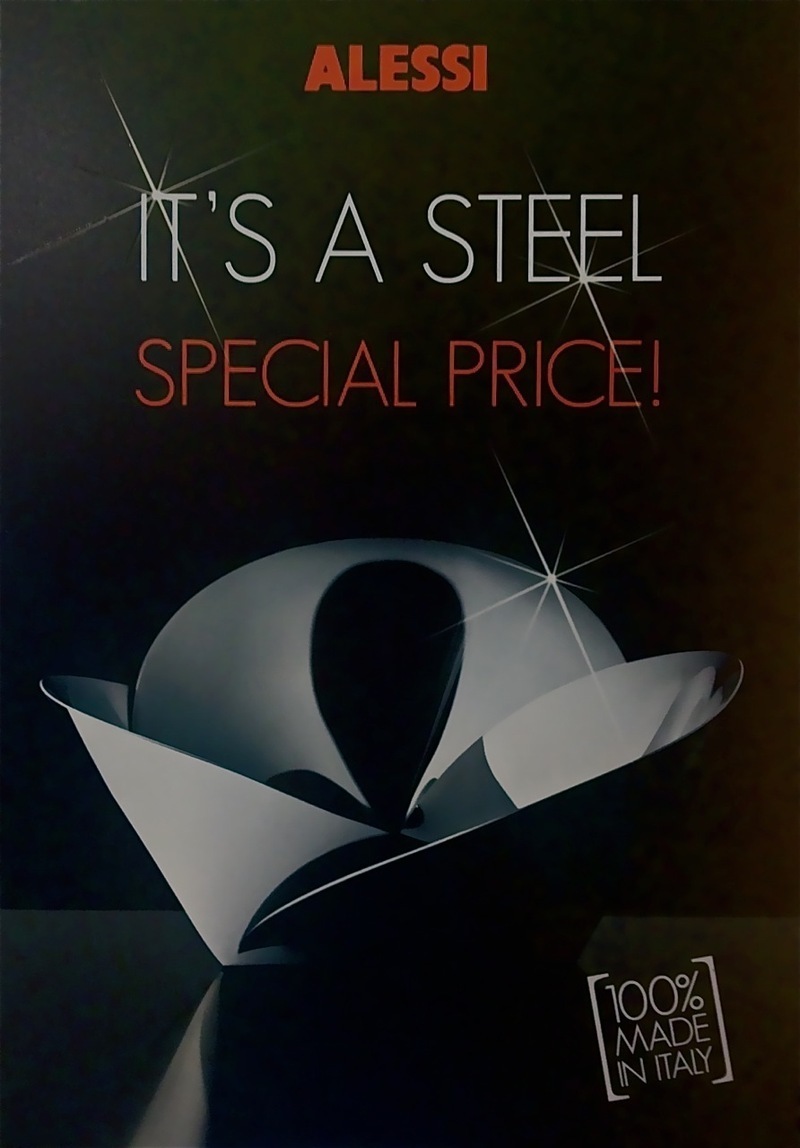 Yes, It's a steel! For a limited time, selected hand-polished stainless steel pieces from the beautiful designs of Alessi are available at 20% off at J. R. Kortman Center for Design. Perfect time to add to your collection or find something of quality and elegance for a wedding, anniversary, or personal gift. A cool deal for these hot summer days. 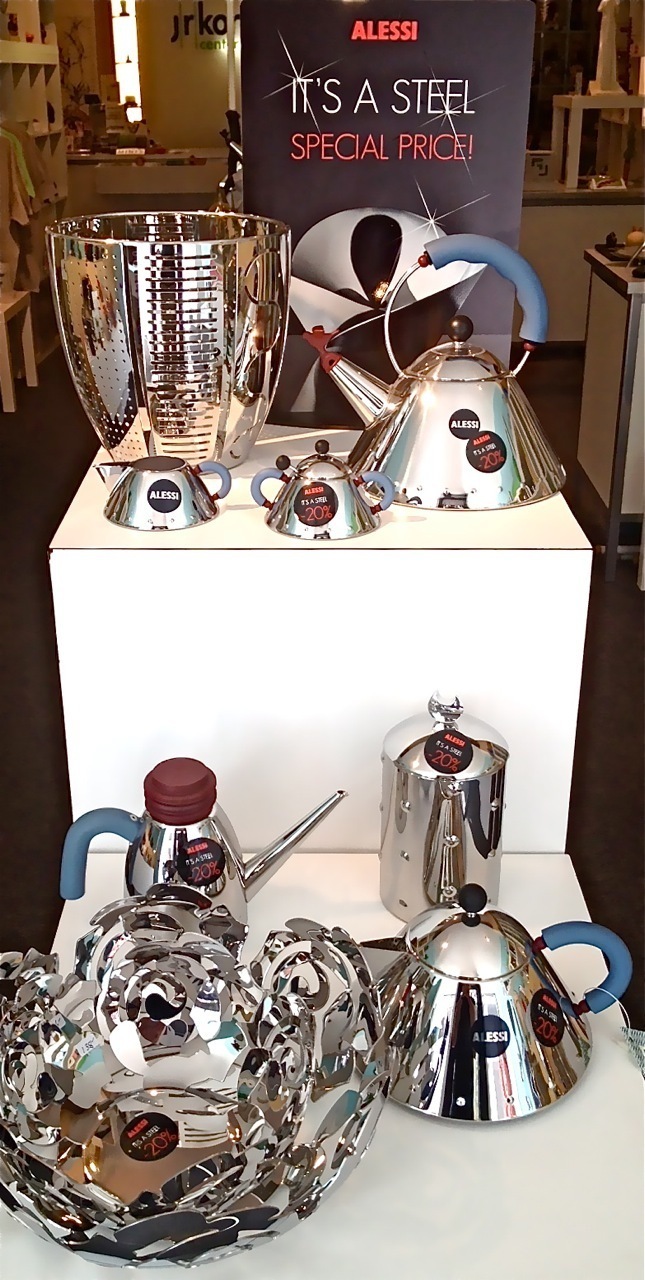 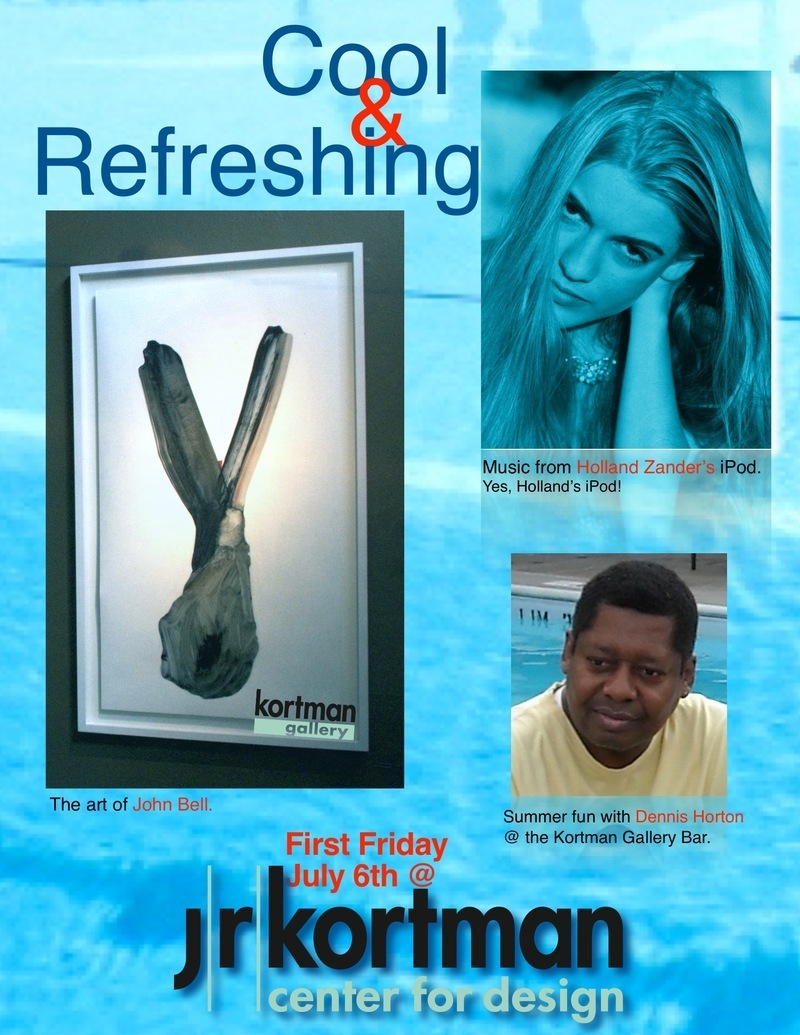 Hope your enjoying this hot 4th of July holiday week. And this year, First Friday downtown (July 6th) is right in the middle of all the celebrating. We will be open in the store until at least 9pm and, of course, the Kortman Gallery Bar will be open even later with Dennis Horton serving up some refreshing beverages along with Summer fun.
You listen to her fantastic music as one of Rockford's hottest performers...now you can listen to what Holland listens to on her iPod. Yes, Holland Zander's unedited iPod playlist will be the featured music upstairs in the Gallery Bar played through the coolest sound system from hear.more.music.
Plus, you won't want to miss "always hungry"...an exhibition of new works by John Bell.
So, stop by before or after the City Market or enjoying dinner in one downtown's great restaurants. We're right on the trolley route, so we're easy to get to no matter where you begin your First Friday evening. Have a cool & refreshing holiday week with J. R. Kortman Center for Design. 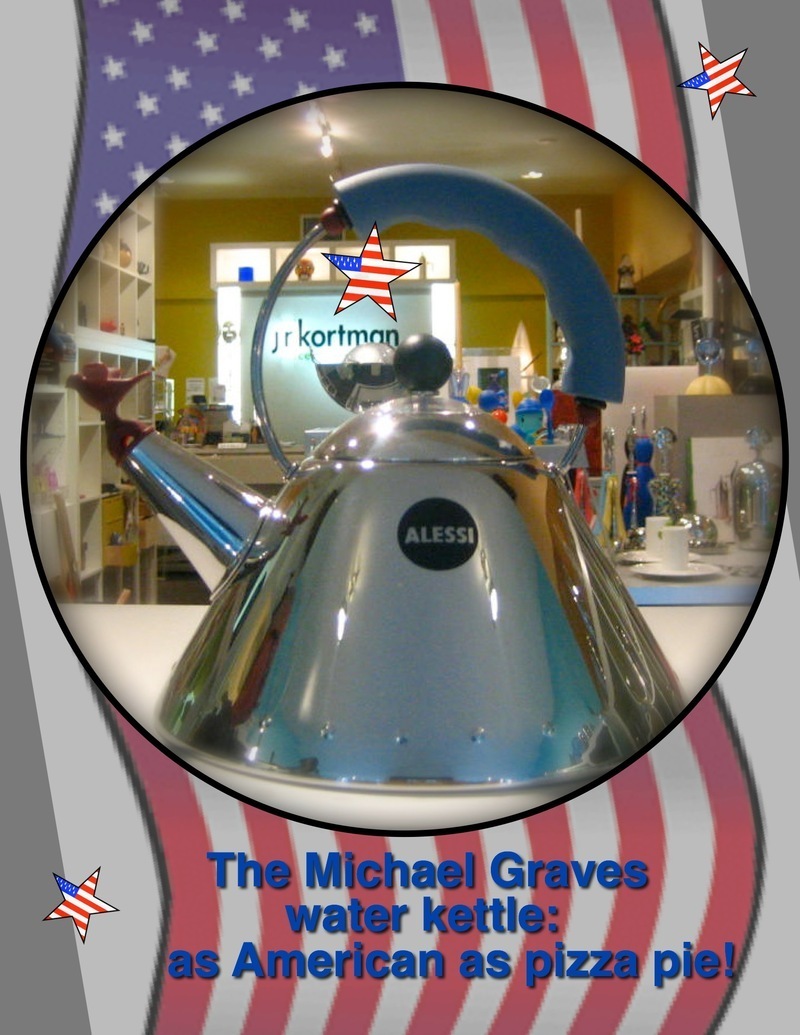 Celebrate the summer with an elegant work of exceptional design from the now classic collection by American architect Michael Graves. Celebrate this great country with great American design from hand-polished stainless steel made in Italy. The subtle reds and blues in Mr. Graves designs would work great on a 4th of July table setting or any time of the year. Summer is also the season for weddings...and Alessi style and design makes for for lasting, useful, and heirloom quality gifts that can be enjoyed by both the bride and groom. See these and other Alessi products at J. R. Kortman Center for Design. 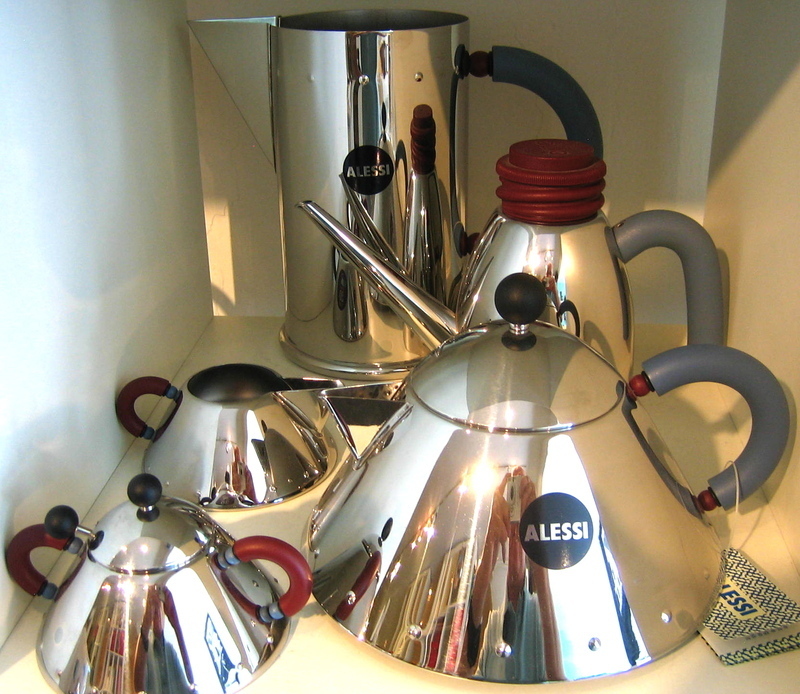 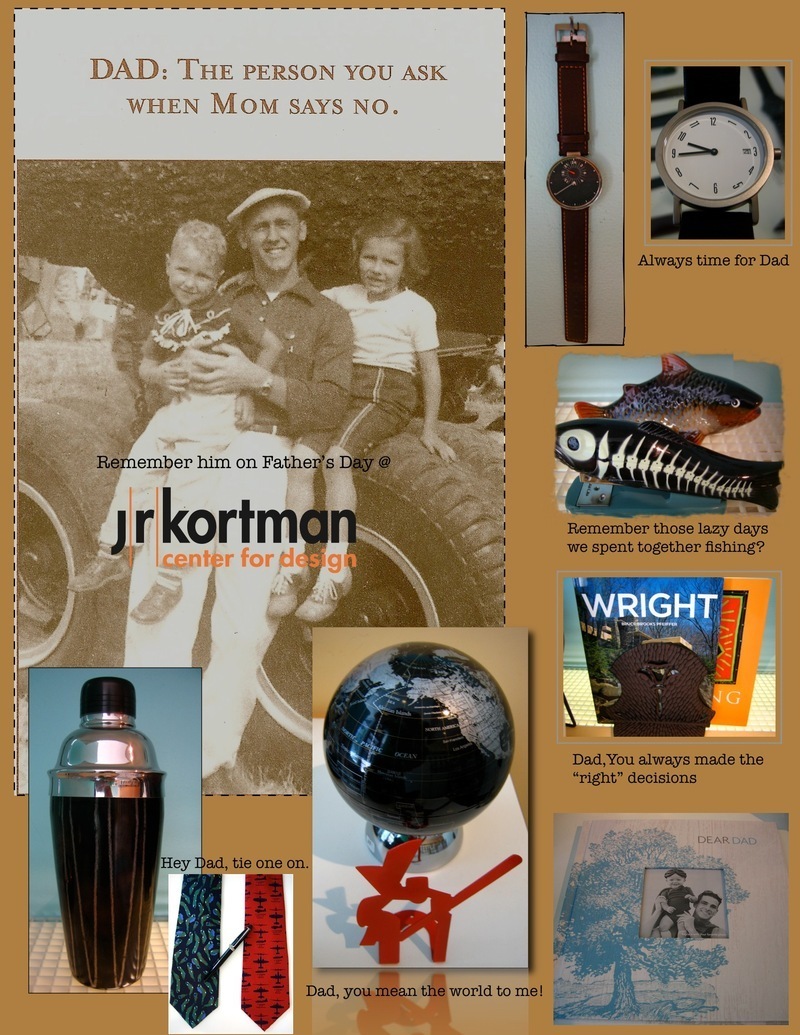 "My father gave me the greatest gift anyone could give a child...he believed in me."

"He didn't tell me how to live; he lived, and let me watch him do it."

"The older I get, the smarter my father seems to get."
These Father's Day sentiments brought to you by Shannon Martin/Girl Designer Greeting Cards and J.R.Kortman Center for Design 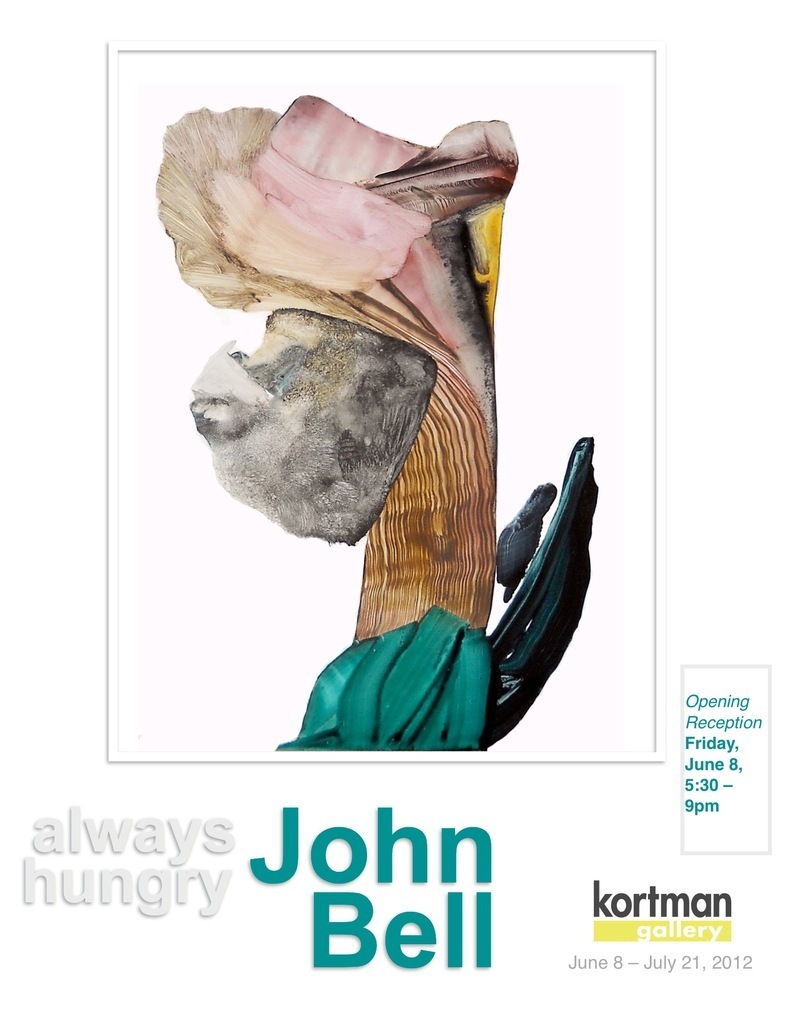 abstract art at Kortman Gallery
Rockford native and artist John Bell returns home on Friday, June 8th to present his latest body of abstract, yet figurative work at the Kortman Gallery.  The exhibition titled “always hungry” features paintings and small sculpture that are motion-filled images that take on a life of their own through muted colors and textured forms and shapes.
“I want my pictures to operate in the realm of potential—in imagining and bringing to life the near-limitless variety of form that life can take on to make itself unique and still survive,” says Bell. Even though Bell’s work at first glance looks abstract, as you look deeper into his art you can see, through imagination, movement and figurative images. As Bell writes in his artist’s statement, “I think of myself as a figurative artist who strives to depict animals as verbs rather than as nouns.”
Bell is a graduate of Boylan High School, with a B.A. from Grinnell College, and MFA from the Minneapolis School of Art and Design.
“John comes from a very artistic and creative family,” said Doc Slafkosky, Kortman Gallery director. “His twin sister Katie has a piece in Rockford Art Museum’s current Midwestern juried art exhibit, his mother, Sarah, is a former art teacher and artist in her own right, and father Kurt is one of the area’s leading craftsmen in historic preservation.”
The opening reception for “always hungry” exhibition by John Bell will be Friday, June 8th from 5:30 to 9pm and will be on display through July 21, 2012.  The gallery is located upstairs at J. R. Kortman Center for Design, 107 North Main Street. For further information call 815/968-0123 or visit www.jrkortman.com.
What: “always hungry” an exhibition of paintings and sculpture by
Rockford native John Bell
When: Opening reception: Friday, June 8th, 5:30 to 9pm. The exhibition runs through
July 21st. Gallery & Store open Monday to Saturday, 10am – 6pm.
Where: Kortman Gallery, upstairs at J. R. Kortman Center for Design,
107 North Main St.
Admission: Free