This holiday season decorate with some fun and exciting ornaments and embellishments from J. R. Kortman. Discover ornaments from Germany, China, Viet Nam, Canada, Italy and even the USA. Add charm and sophistication with unique and colorful home accents that will truly make the season bright. And no Christmas tree is complete without ornaments from the Rockford Landmark Ornament Collection.  Shop Downtown at an intriguing array of shops, from the Rockford Art Deli to Rockford Art Museum Gift Store, from Minglewood & Plush to Just Goods & Phoenix Traders and everything in between. Also, you can enjoy lunch or dinner and cocktails in some of Rockford's best restaurants and bars. Christmas in the city and J. R. Kortman Center for Design! 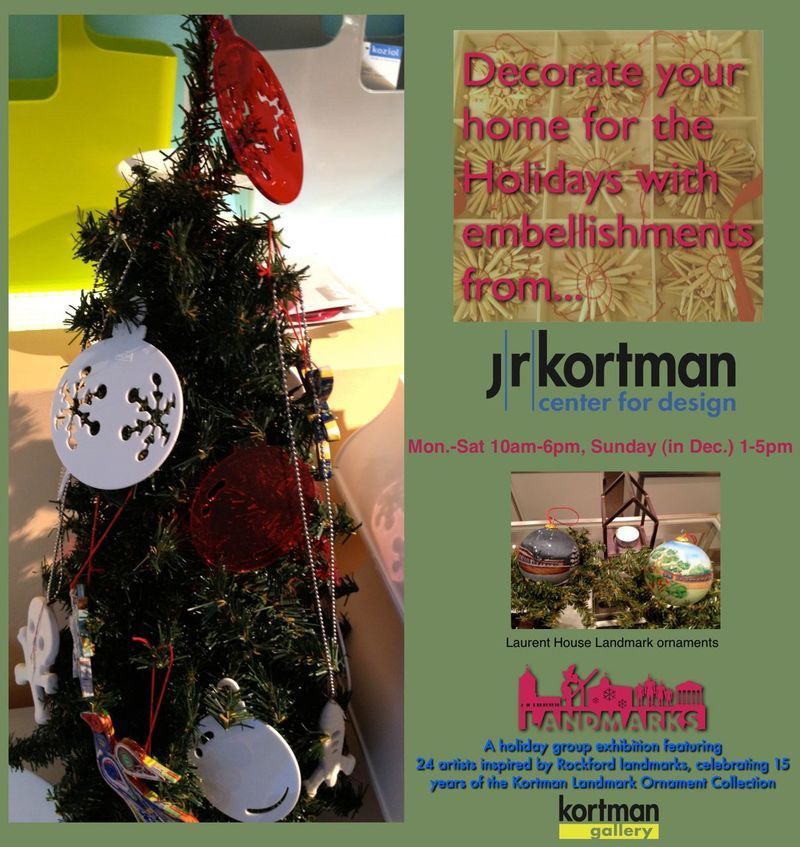 2 floors of Art, Design, and holiday shopping fun @ J.R. Kortman Center for Design. Store & Gallery open Monday through Saturday 10am to 6pm and Sundays, 1 to 5pm. And if you would like a quiet and undisturbed shopping experience call us and we can open after hours for your convenience...815-968-0123. Colorful gift ideas for everyone! Feliz Hanukwansmas to one and all. 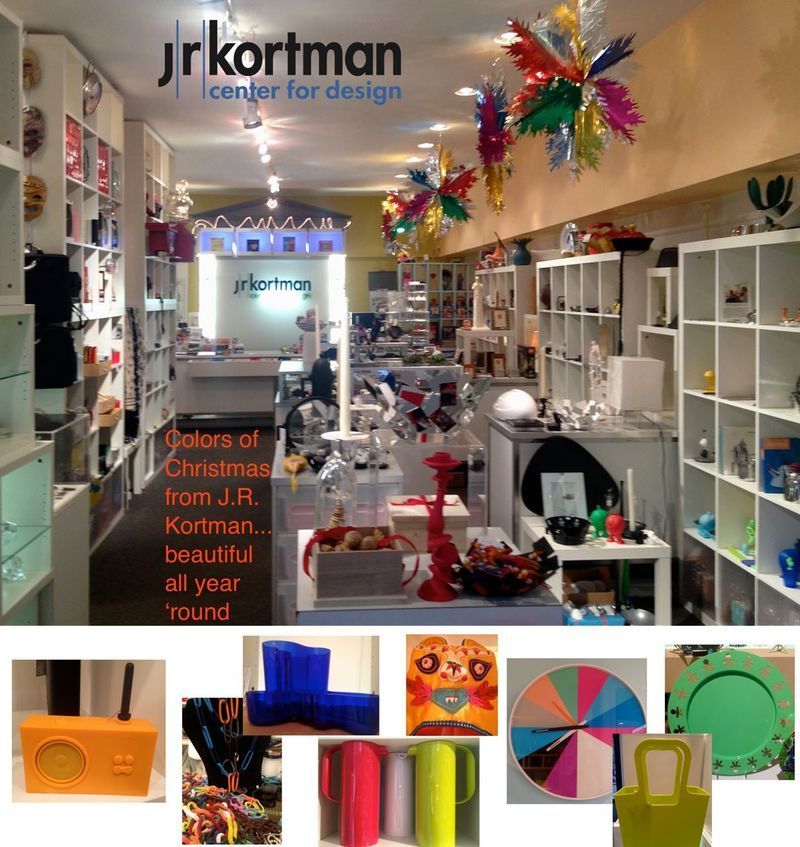 First Friday, December 7th, promises to be quite a festive evening Downtown Rockford. J. R. Kortman Center for Design will be open for shopping at least until 9pm. We are introducing our newest Landmark hand-painted ornament for 2012: The Laurent House, Rockford's architectural treasure by Frank Lloyd Wright. And upstairs in the Kortman Gallery see "Landmarks," a holiday group exhibition featuring 24 Rockford artists...and of course, the Gallery Bar will be open even later featuring two very special holiday beverages to add to the yule time spirit. Michael La Loggia will be mixing up the holiday cheer and keeping the joy going late into the evening.  For this month's "What's on your iPod?" we will be revealing the unedited (HoHoHo) playlist of Santa Claus! Hear his playlist through a great sound system from Hear.More.Music.
Soooo, get all your shopping done and have a great time doing it this First Friday, Downtown @ J. R. Kortman Center for Design! 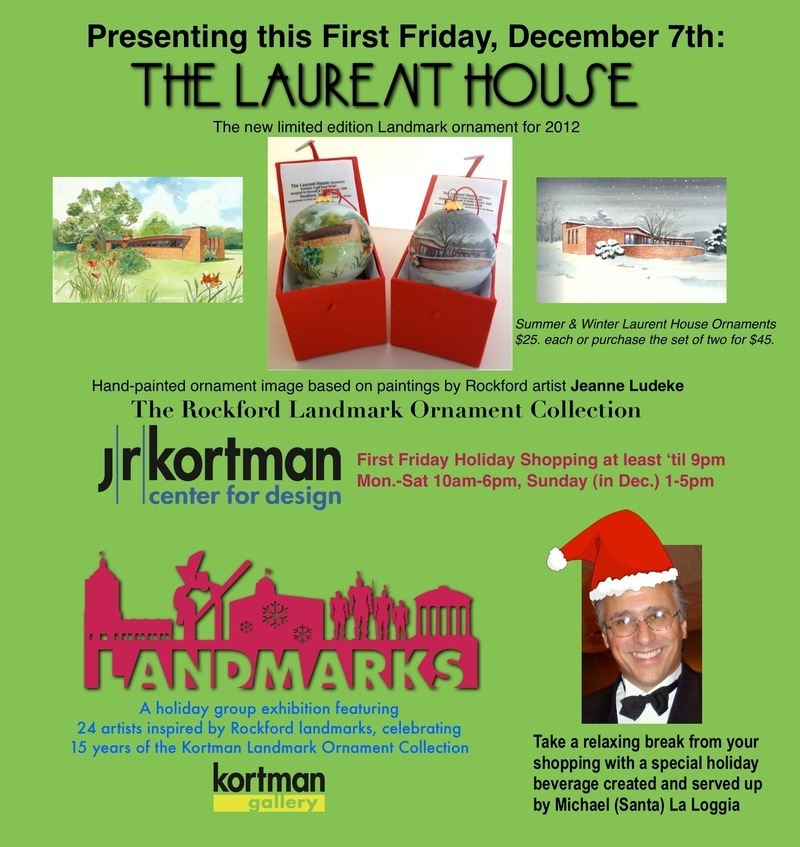 Frank Lloyd Wright’s Laurent House featured in Landmark Ornament Collection
The only building in Rockford designed by famed architect Frank Lloyd Wright, the Laurent House, is the featured ornament in the Rockford Landmark Ornament Collection for the 2012 holiday season at J. R. Kortman Center for  Design.
The elegant Usonian home on Springbrook Road is actually represented on two different ornaments, one featuring the front of the house in Summer and the other, a rear view in a Winter setting. The hand-painted images on the ornaments are based on two paintings of the house by Rockford artist Jeanne Ludeke.
According to Doc Slafkosky, co-owner of J. R. Kortman, the two Laurent House ornaments are sold separately for $25. “You can purchase the set of both the Summer and Winter scenes of the house for $45,” says Slafkosky.  A portion of the proceeds from the sale of the Laurent ornaments benefit the Laurent House Foundation.
The Laurent House, a world class architectural treasure, is the latest Rockford property to be designated a National Landmark. Kenneth Laurent, a paraplegic from a World War II injury, commissioned Frank Lloyd Wright to design the house for him and his wife, Phyllis in 1949. It is the only Wright building designed specifically to be fully handicapped accessible.
For 15 years J. R. Kortman Center for Design has been featuring hand-painted ornaments depicting Rockford landmarks. To celebrate this milestone year, the Kortman Gallery (located on the second level) is presenting a group holiday exhibition simply titled, “Landmarks,” which opened November 23rd. Twenty-four of some of Rockford’s most accomplished artists showcase works inspired by landmarks featured in the Rockford Landmark Ornament Collection.
Besides the Laurent House the Rockford Landmark Ornament Collection includes a special edition of Memorial Hall, the Woodward Governor building, and the North Main Street Armory. Other ornaments available in the Landmark Collection include “Guardians of the Rock” Sculpture by Theresa Agnew, the Beattie Park Gazebo, Sinnissippi Lagoon, the Rockford News Tower, the Faust Landmark Building, Coronado, and Midway Theater Buildings, and the Coronado stage, Sinnissippi Bur Oak tree, Old City Hall, and “Symbol” sculpture, the best selling ornament in the collection.
“Other top sellers include four ornaments depicting different scenes of the beautiful Nicholas Conservatory and Anderson Japanese Gardens,” says Slafkosky.
In addition to the Swedish Historical Society’s “Erlander Home,” other historic houses in the collection include the  “Limestone Mansion,” home to the Community Foundation of Northern Illinois,  and the “Cobblestone House,” located at 2127 Broadway, one of Rockford’s oldest houses.
All the Landmark ornament images are individually hand-painted on the inside of a glass sphere, utilizing an ancient Chinese technique originally applied to “snuff” bottles. Each collectable ornament is a miniature work of art.  All ornaments with the exception of the Laurent House are priced at $22 each.
For more Info contact Doc or Jerry at 968-0123.
Opening night of "Landmarks," a group exhibition featuring 24 artists inspired by Rockford landmarks, celebrating 15 years of the Kortman Landmark Ornament Collection, was a smashing success! Here are some the peolple who attended Kortman Gallery for this festive holiday event. The "Landmarks" exhibiton runs through January 5th, 2013. A fun show for the entire family to see while enjoying a fantastic holiday shopping experience on two floors at J. R. Kortman Center for Design in Downtown Rockford! 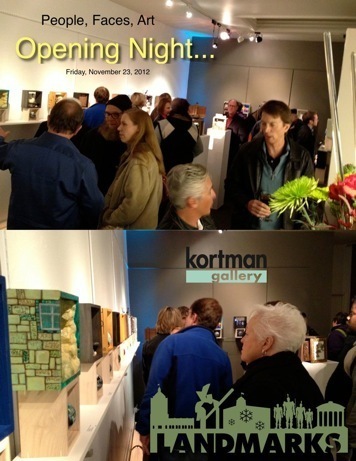 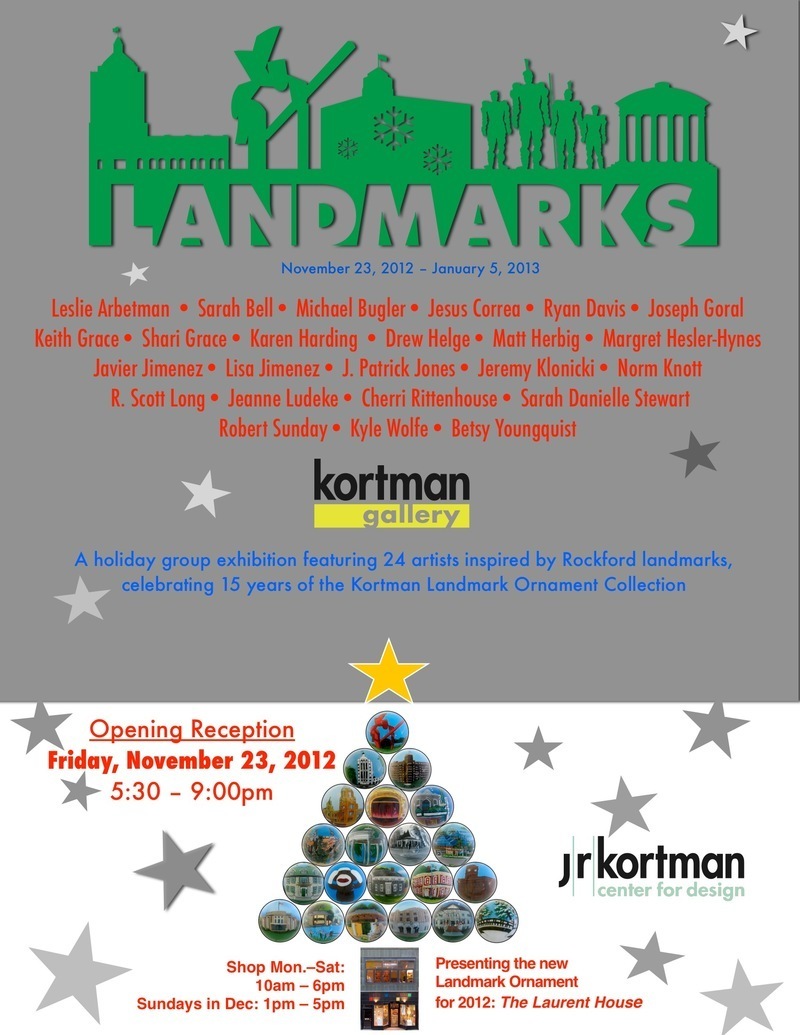 For 15 years J. R. Kortman Center for Design has been featuring hand-painted ornaments depicting Rockford landmarks. To celebrate this milestone year, the Kortman Gallery will be presenting a group holiday exhibition simply titled, “Landmarks,” opening Friday, November 23rd. Twenty-four of some of Rockford’s most accomplished artists will show works inspired by landmarks featured in the Rockford Landmark Ornament Collection.
Each artist was given a blank 7” by 7” shadow box and assigned an ornament representing a local landmark. The artists were asked to create a piece of art, inspired by the landmark, that would fit within the 7” by 7” space. “Since this is a special holiday show, we wanted this exhibit to feature small scale art, so the shadow box constrains the size of each piece,” said Doc Slafkosky, gallery director. “Each work of art will be displayed next to the corresponding Rockford Landmark Ornament creating two very special holiday treasures.” Whoever purchases the art will also receive the ornament that inspired the art.
Landmarks that inspired the artists include Sinnissippi Lagoon, the Faust, Symbol, Anderson Gardens, the Coronado and Midway Theaters, NIcholas Conservatory and more,
“The exhibit is the final in a series of art shows influenced by local architecture,” Slafkosky said. “Last holiday season we presented ‘The Wright Inspiration’ with art inspired by the Laurent House, and our previous show ‘Urban Treasures: Renaissance through Imagination’ presented works influenced by four historic downtown buildings.”
Participating artists include Leslie Arbetman, Sarah Bell, Michael Bugler, Jesus Correa, Ryan Davis, Joseph Goral, Keith Grace, Shari Grace, Karen Harding, Drew Helge, Matt Herbig, Margret
Hesler-Hynes, Javier Jimenez, Lisa Jimenez, J. Patrick Jones, Jeremy Klonicki, Norm Knott, R. Scott Long, Jeanne Ludeke, Cherri Rittenhouse, Sarah Danielle Stewart, Robert Sunday, Kyle Wolfe, and Betsy Youngquist.
An opening reception for  “Landmarks,” will be Friday, November 23rd from 5:30 to 9pm. The art  will be on display through January 5th, 2013.  The gallery is located upstairs at J. R. Kortman Center for Design, 107 North Main Street. For further information call 815/968-0123 or visit www.jrkortman.com.
What: “Landmarks,” a holiday group exhibition
When: Opening reception: Friday, November 23rd, 5:30 to 9pm. The exhibition runs through                      January 5th, 2013. Gallery & Store open Monday to Saturday, 10am – 6pm. Sundays (in December), 1pm to 5pm.
Where: Kortman Gallery, upstairs at J. R. Kortman Center for Design,
107 North Main Street, Downtown Rockford
Admission: Free 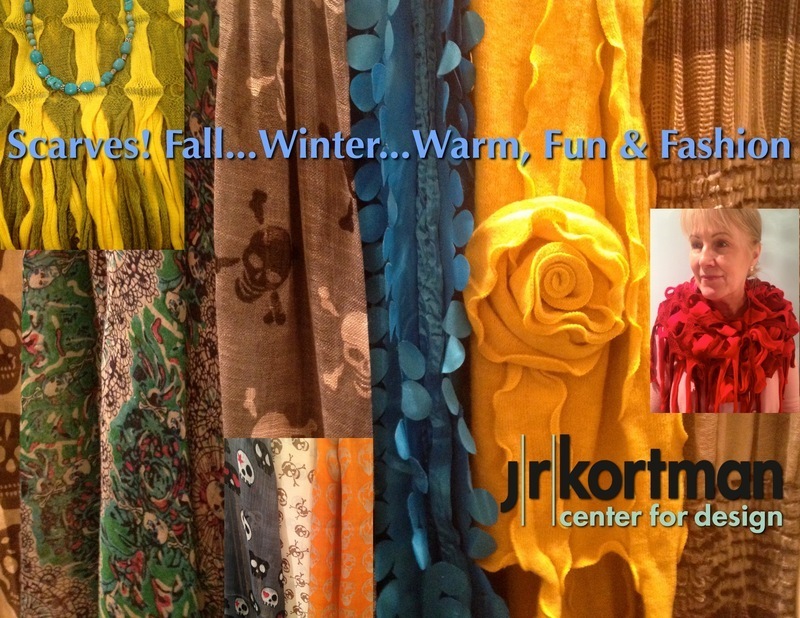 As the cold weather approaches, stay fashionably warm with a sophisticated, colorful, and fun scarf from J. R. Kortman Center for Design. New designs just in feature a broad selection of styles, fabrics, and imagery for both women and men. Winter fashion can be so much more entertaining with a warm and vivid scarf from J. R. Kortman Center for Design. Visit us Downtown Rockford at 107 North Main Street and don't miss "Urban Treasures: Renaissance through Imagination," a group exhibition upstairs in the Kortman Gallery. 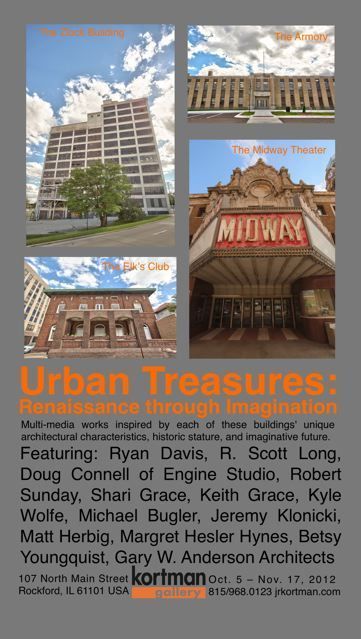 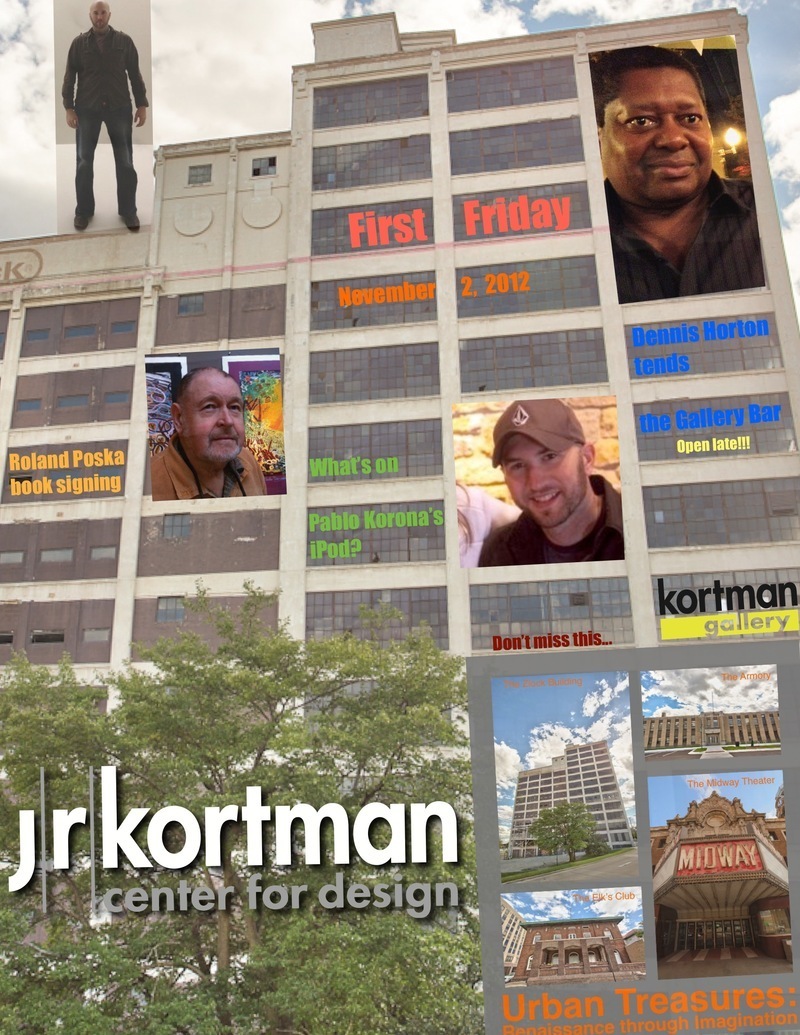 Looking forward to this First Friday (Nov. 2nd) at J. R. Kortman Center for Design for a fun filled evening Downtown. Shop our store until 9pm and relax upstairs in the Kortman Gallery where Dennis Horton will be tending the Kortman Gallery Bar open even later. Internationally recognized Rockford artist Roland Poska will be signing his "Great Human Race" book. See "Urban Treasures:  Renaissance through Imagination," an exhibition featuring works by 12 Rockford artists while enjoying music from Pablo Korona's iPod played through a state of the art sound system from Hear.More.Music.
Pablo Korona is a storyteller and creator of OurCityOurStory.com. Stop by to talk story ideas if you have them, and talk about his newest feature that will revolve around Veterans. Do you have a Rockford story worth telling? Talk to him and others at this First Friday show!
If you don't feel like talking, just dance. 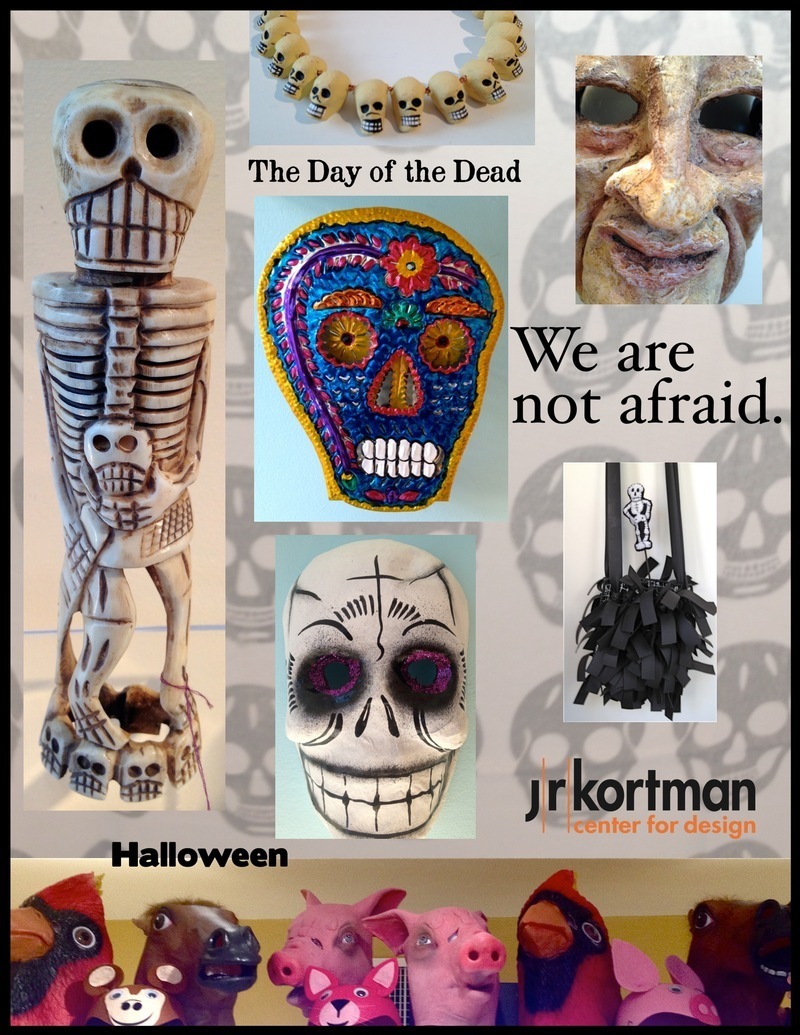 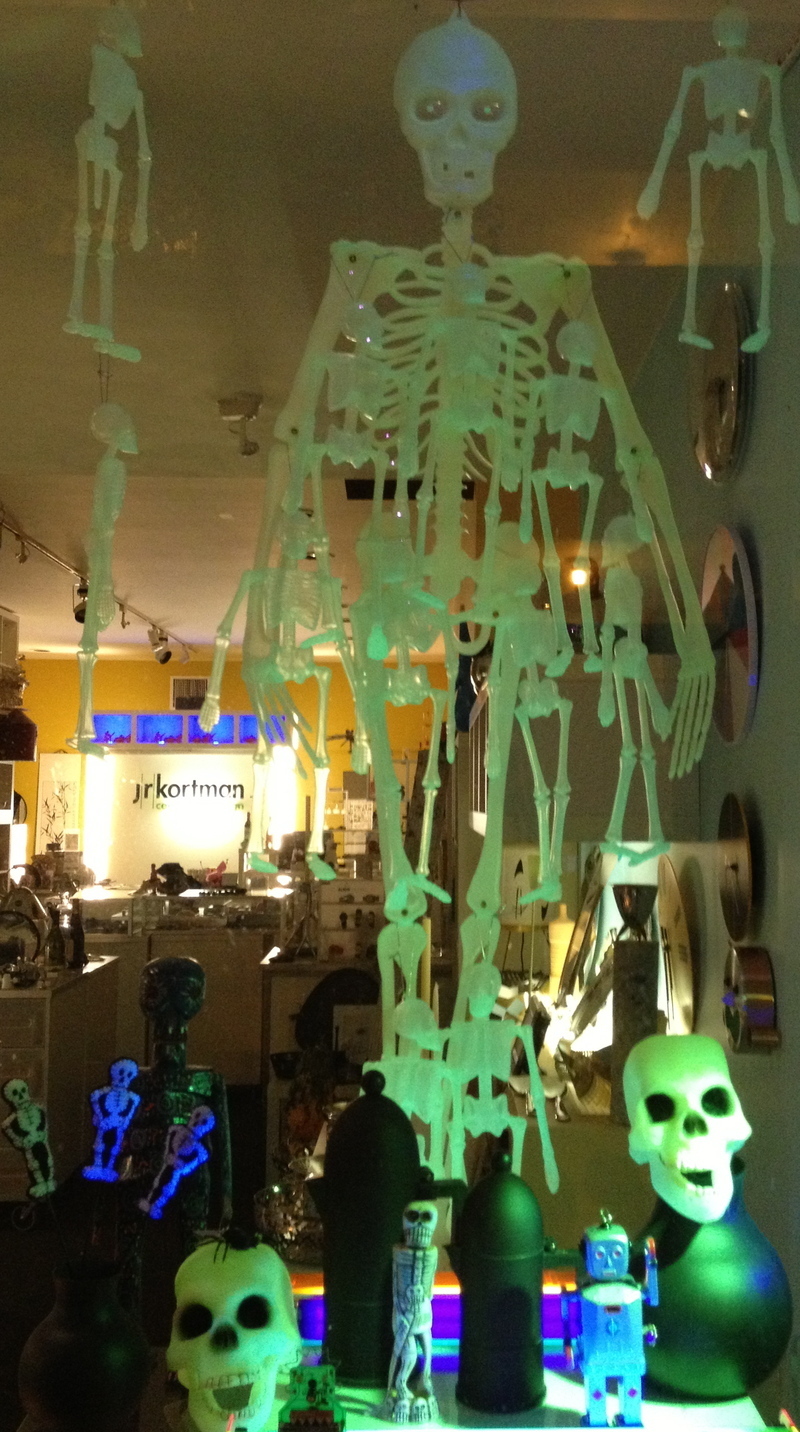 Download Holloween_boner.m4v
Do not be afraid to find something spooky cool this Halloween season at J.R. Kortman. Spooky things for Halloween and folk art from Day of the Dead are cool enough to show off all year 'round. And for a savory trick or treat "bring home the bacon" with a wacky treat or collectible from our bacon collection. Visit us Downtown and see "Urban Treasures: Renaissance through Imagination" in the Kortman Gallery featuring intriguing works by 12 Rockford artists...now through November 17th. 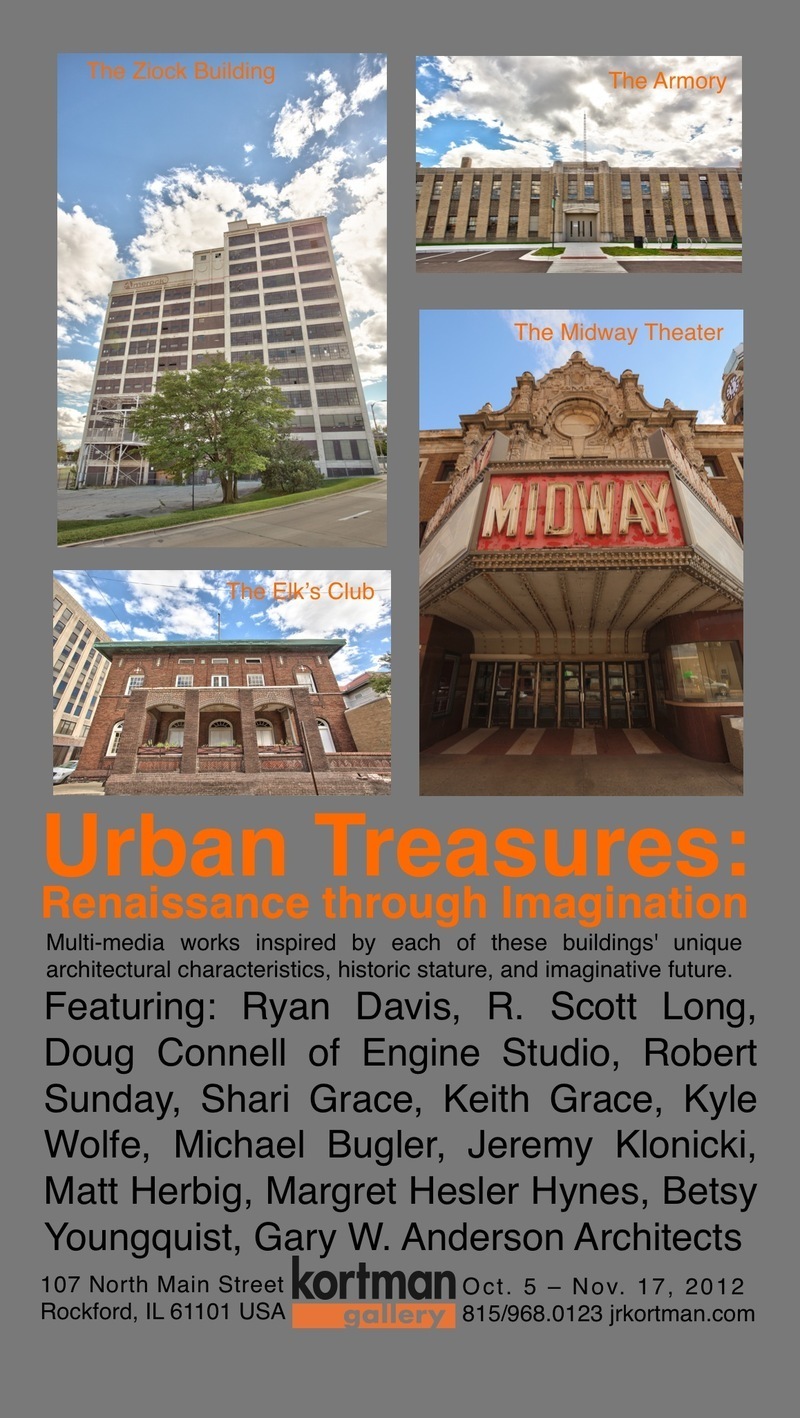 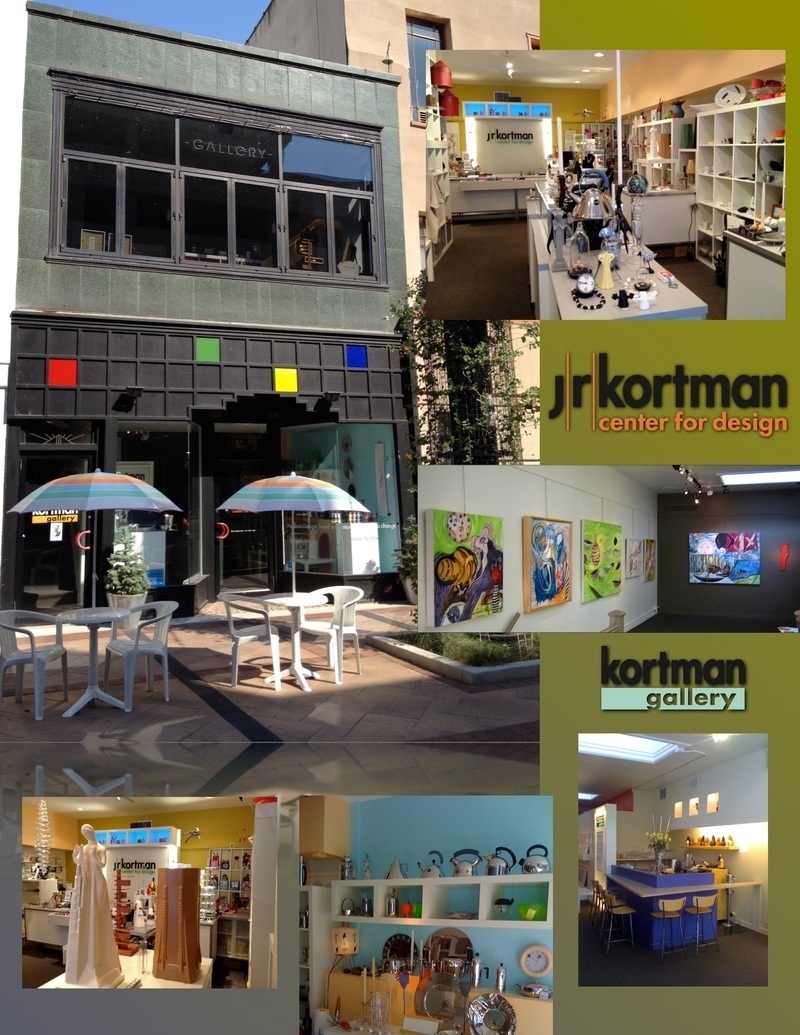