First Friday, June 3rd coincides with the opening of Leslie Arbetman's exhibition of new works in the Kortman Gallery. Dennis Horton will be hosting the Gallery Bar and we'll be exposing the entertaining unedited playlist from the iPod of Patty Rhea, curator for the Rockford Art Museum. Stop by for this fun filled Friday night in Downtown Rockford...and also shop @ J.R. Kortman Center for Design for wedding and graduation gifts. The store will be open at least until 9pm and the Gallery Bar will stay open even later. Hope to see you First Friday, June 3rd. 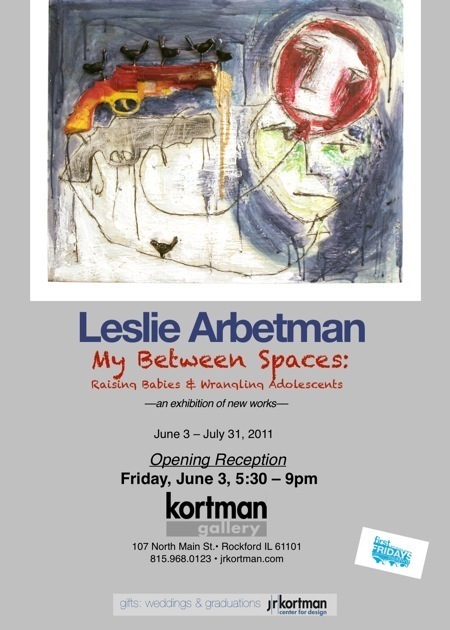 If your viewing this page via jrkortman.com see images and more information on Leslie Arbetman's Kortman Gallery exhibition by clicking on "current show" option under Kortman Gallery or vist www.kortmangallery.posterous.com. 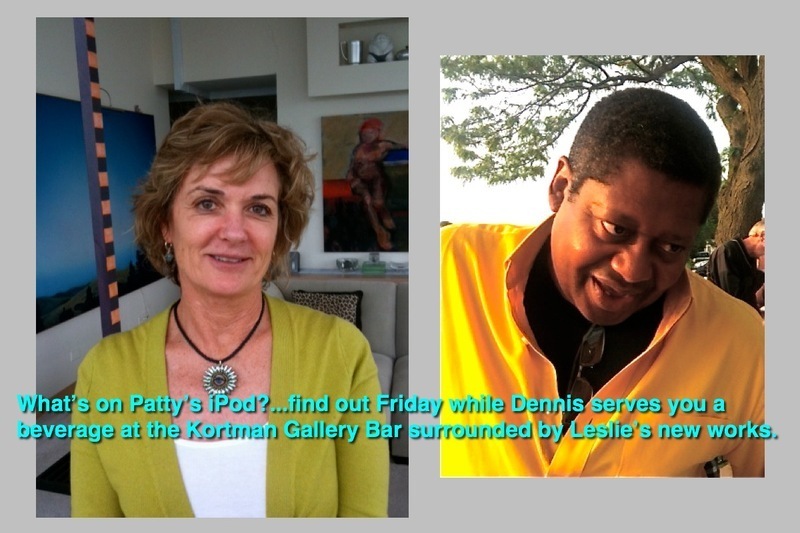 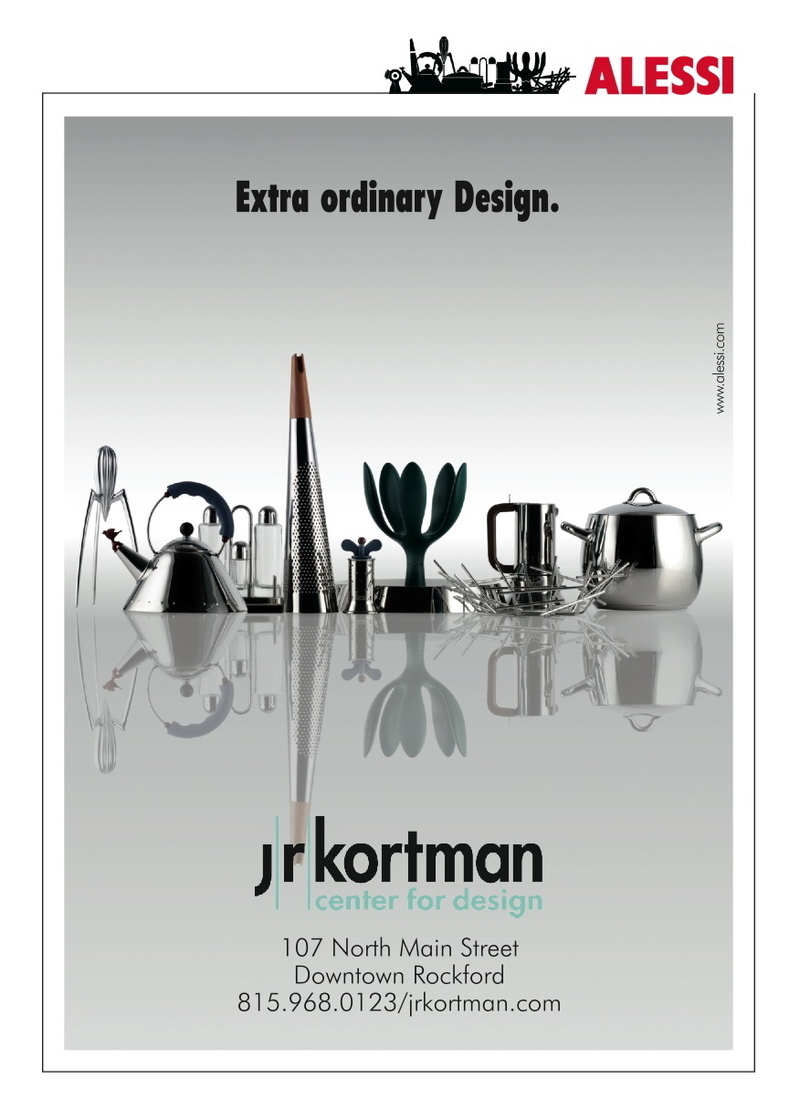 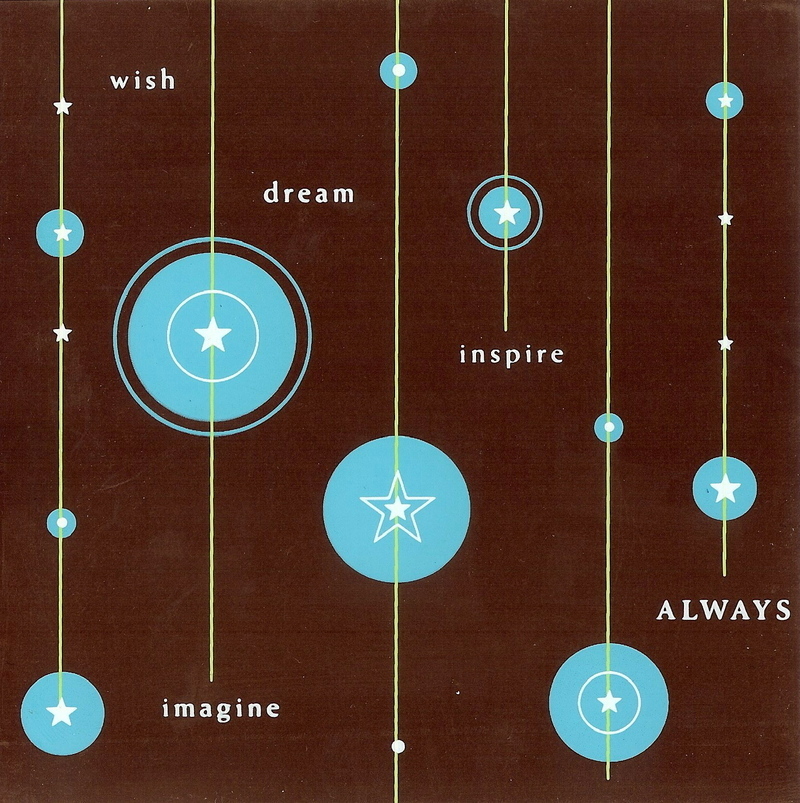 This First Friday (May 6th) shop for Mom 'til 9pm @ J.R. Kortman Center for Design and relax upstairs in the Kortman Gallery where you can see the small scale works by more than 20 of Rockford's most intriguing artists in "Scale: LARGE & small," a collaborative group exhibition exploring the visual and emotional impact scale has on our perceptions of art.  See the LARGE scale corresponding works @ Prairie Street Gallery also on Friday night.
Michael LaLoggia will be taking care of you at the Kortman Gallery Bar while we expose the unedited playlist from John Groh's iPod. Art, Drinks, Shopping and fun Music! What a great way to enjoy a Friday night in Downtown Rockford! 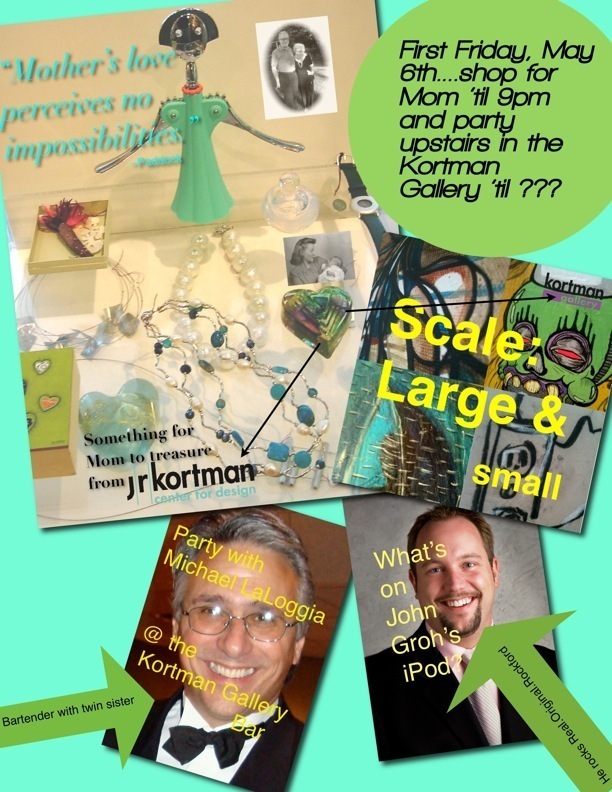 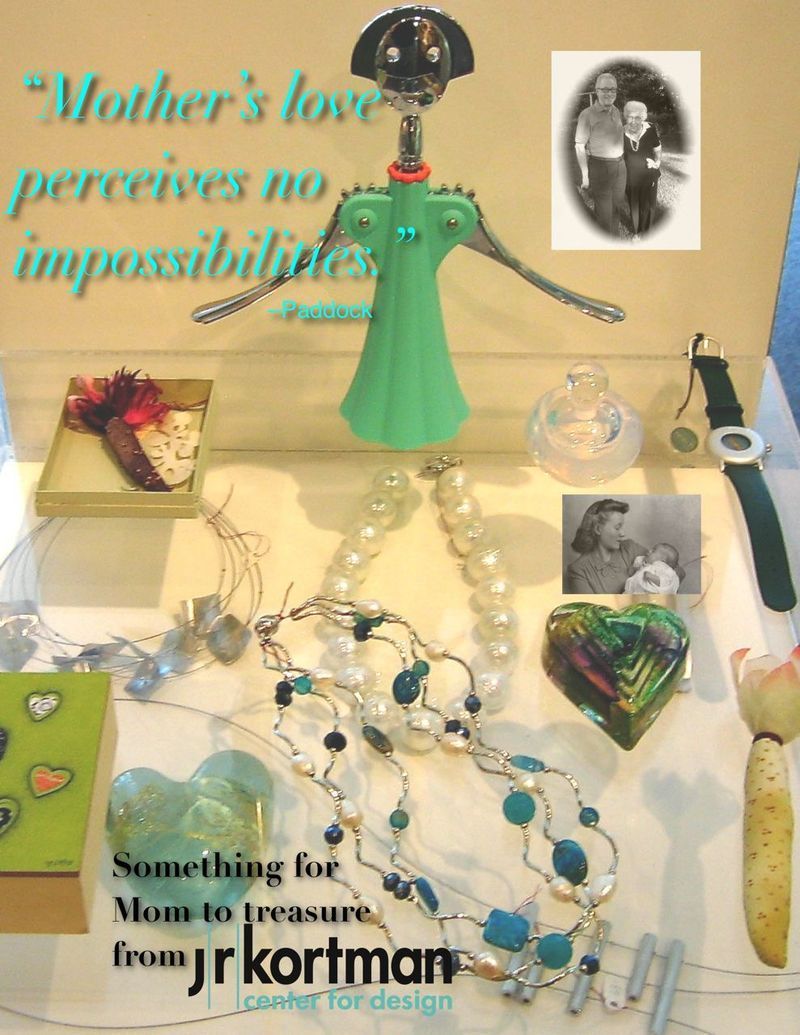 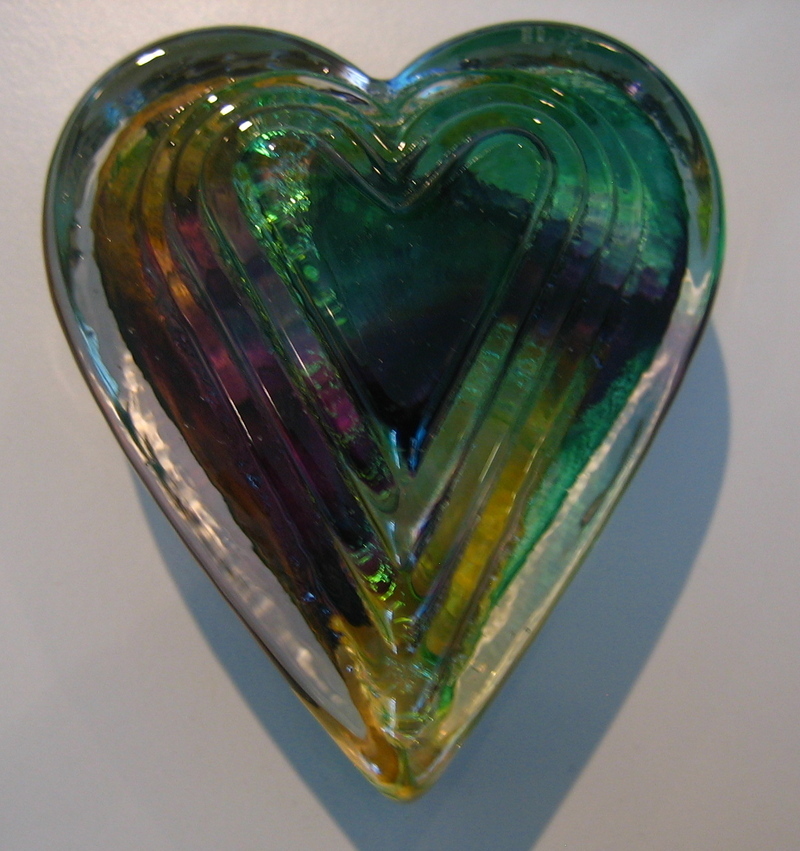 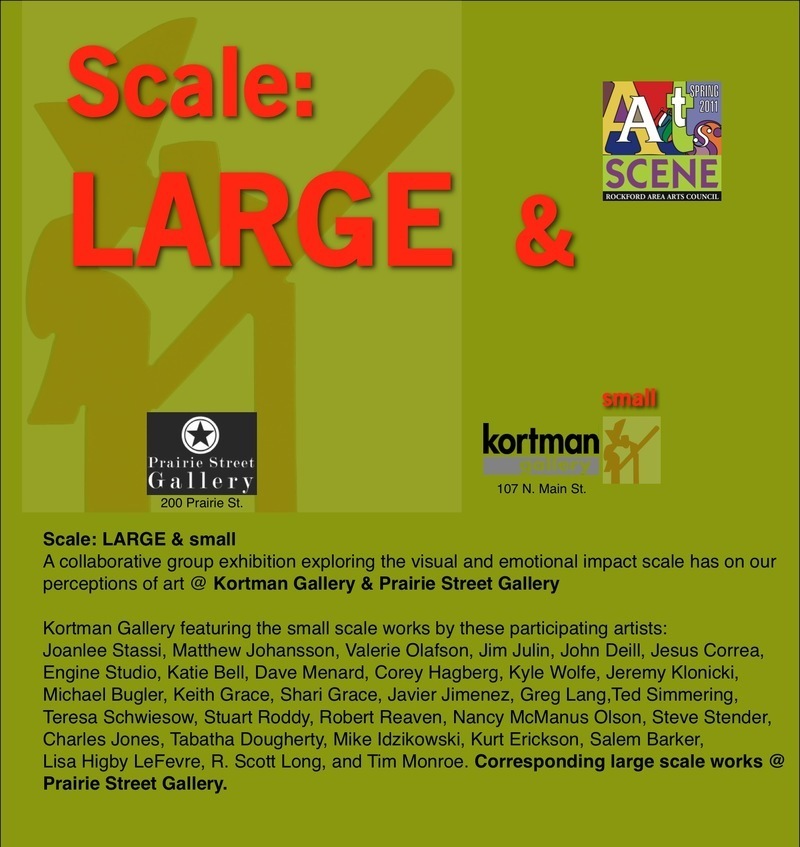 Size does matter. Just think of how powerful a large scale piece of art can be...such as Liberman's "Symbol" along the Rock River...it can create excitement, a sense of place, and even controversy. Then think of how intimate and personal a small painting can be. What is even more fascinating to consider is to see the same imagery in different scale. We will react differently to a small painting than we do to LARGE painting even if the image is the same. Artist John Deill said that several years ago he painted a small nude and everyone told him it was such a neat little painting. So he decided to paint the same nude on a large canvas. The reaction was entirely different. Some people were even shocked by the image!
So, we thought we would explore the impact that scale has not only on art, but also on the viewer. Some pieces in the exhibition both LARGE & small have the exact same images. Other works feature the same image concept but presented in a different scale. In the Kortman Galley you will see the small scale works by some of the Rockford area's leading artists. The LARGE scale versions can be seen at the Prairie Street Gallery. Feel free to photograph the works at each gallery...see and feel how different scale affects each of these intriguing works of art.
DETAILS: Below are photo details of each of the pieces in the Kortman Gallery show which is not only on exhibit ArtScene weekend, but also Monday through Saturday, 10am to 6pm through May 15th. Come, see and enjoy the full images in the Kortman Gallery. 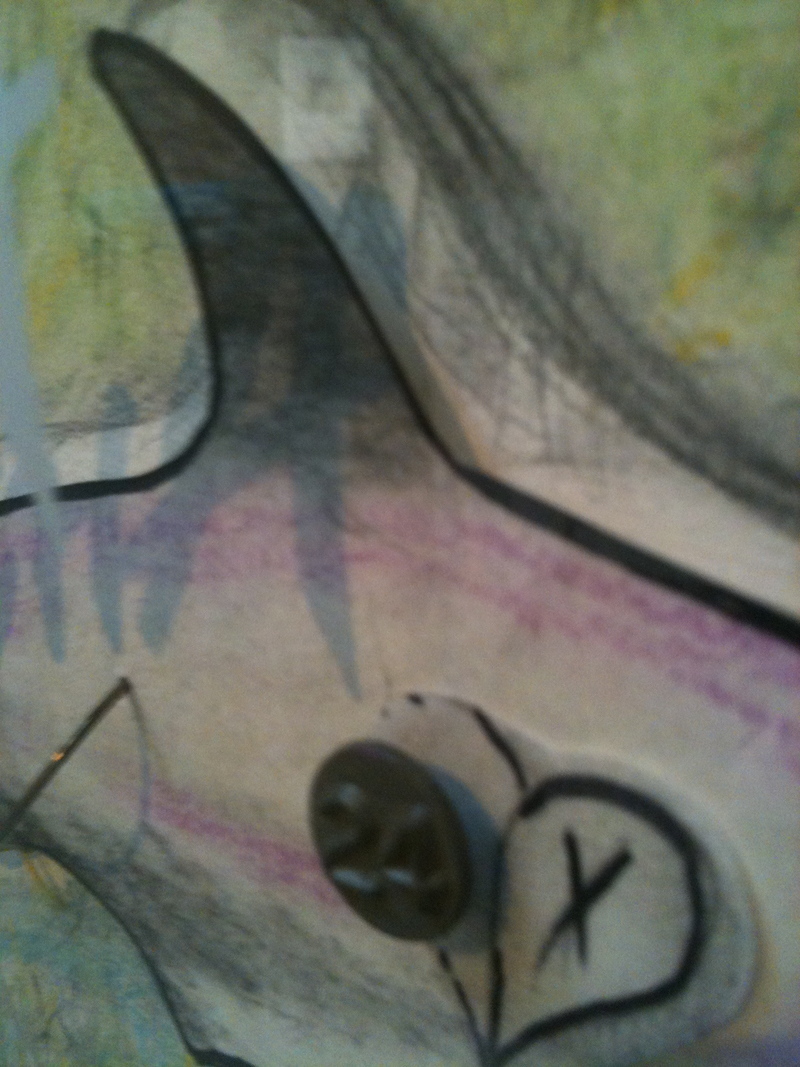 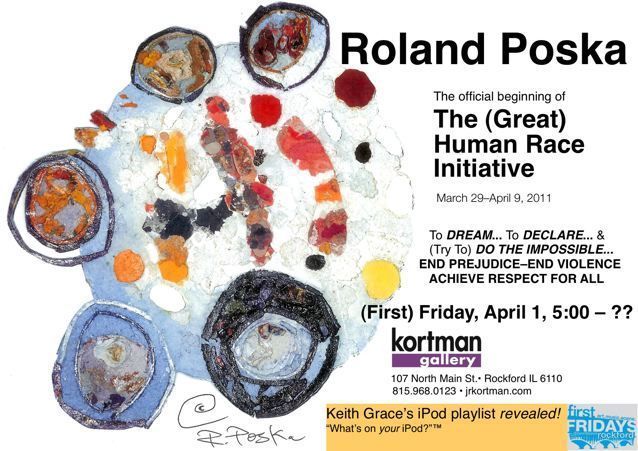 This First Friday Kortman Gallery is presenting Roland Poska's remarkable lithographs, hand printed from stone. Mr. Poska's exihibiton is the official beginning of "The (Great) Human Race Initiative," an art and philosophical project that he has been promoting for more than 30 years. Stop by and meet Mr. Poska and sign his prints to show support for his noble mission. The store will be open 'til 9 and the gallery will stay open even later. Dennis Horton will be hosting the Gallery Bar and we will be revealing the music playlist from the iPod of Rockford artist and graphic designer Keith Grace. 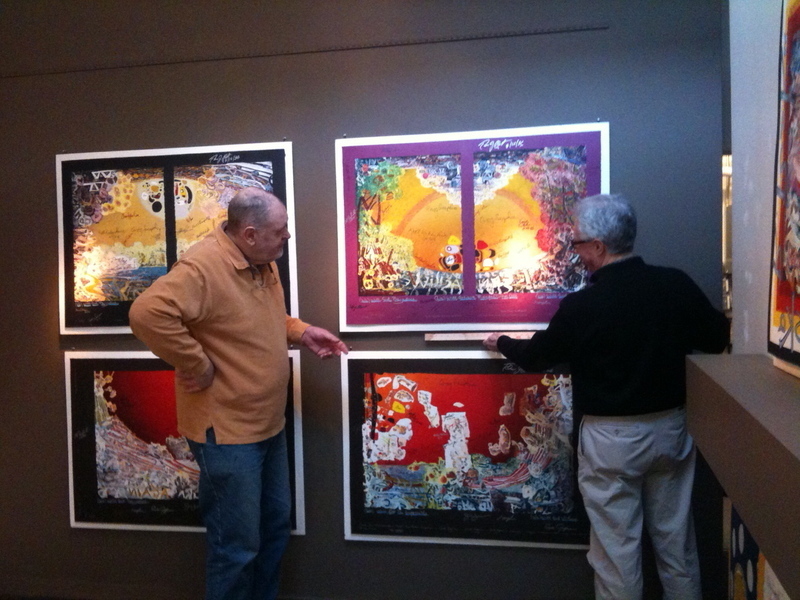 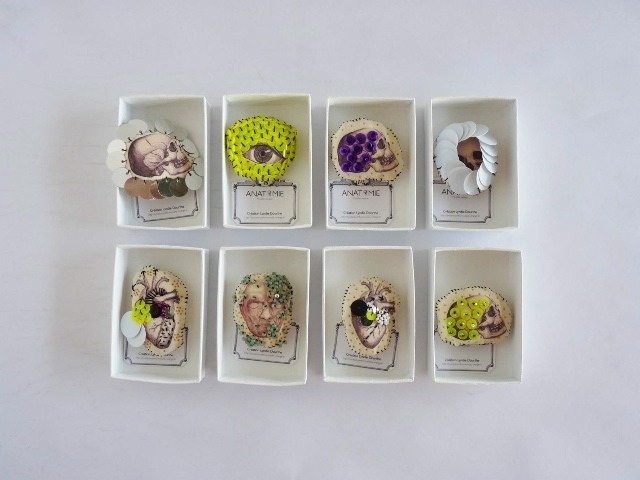 French artist Lyndie Dourthe lives and creates her beautiful, intimate objets d'art in Paris. J. R. Kortman invites you to stop in and see these delicate handmade pieces which can be worn or treasured as a small works of art. 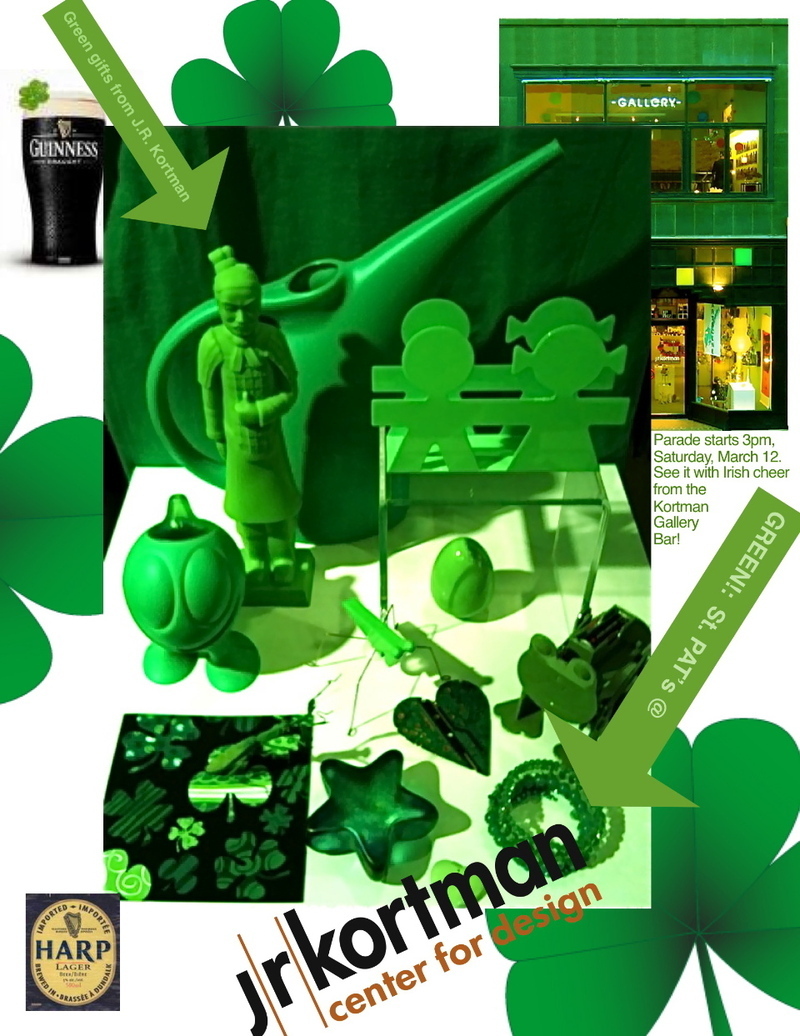 For the first time in more than 30 years the St. Patrick's Day Parade will march down Main Street...and pass right by J.R.Kortman Center for Design. We will have some tables out in front where you can relax over an Irish beer or (if it's too cold) you can watch the parade from upstairs in the Kortman Gallery. Our favorite leprechaun bartender Dennis Horton will be on hand to man the Kortman Gallery Bar. And, of course, you can shop for cool green things in the store which will be open 'til 6pm on Saturday. You can also see work by one of our favorite "Irish-Italian" artists, Jennifer Mullin on exhibit now through March 15th in the Kortman Gallery. An rud a lionas an tsuil lionann se an croi!
This Friday, March 4th, is another First Friday, Downtown and @ J.R. Kortman Center for Design & Gallery...see the colorful works by Jennifer Mullin, relax over a drink served up by Michael LaLoggia tending the Kortman Gallery Bar, and groove to music revealed from Dan Minick's iPod...."What's on your iPod?"™ Always fun on First Friday! See you here! 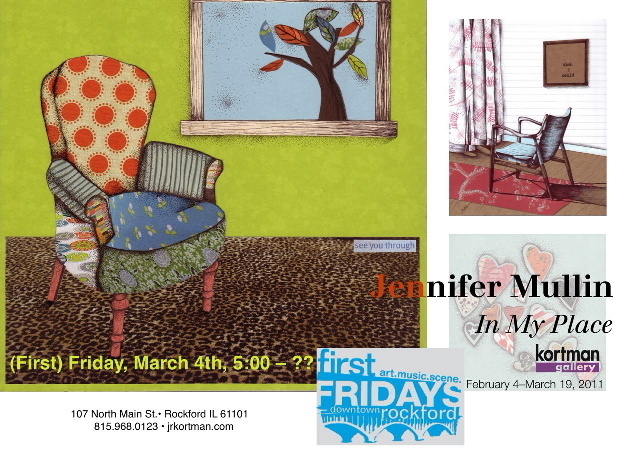 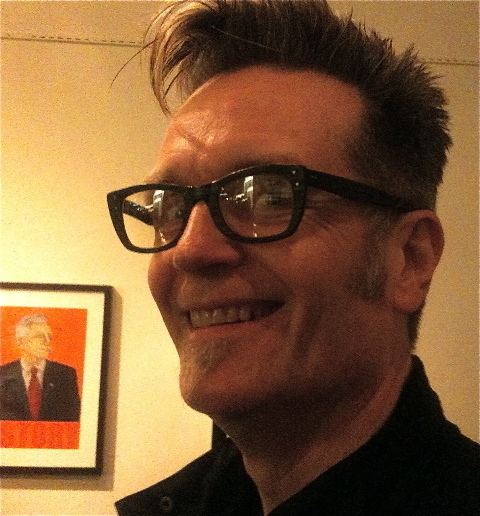 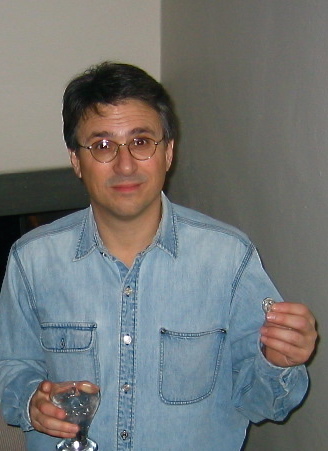 Michael will keep your drink fresh! 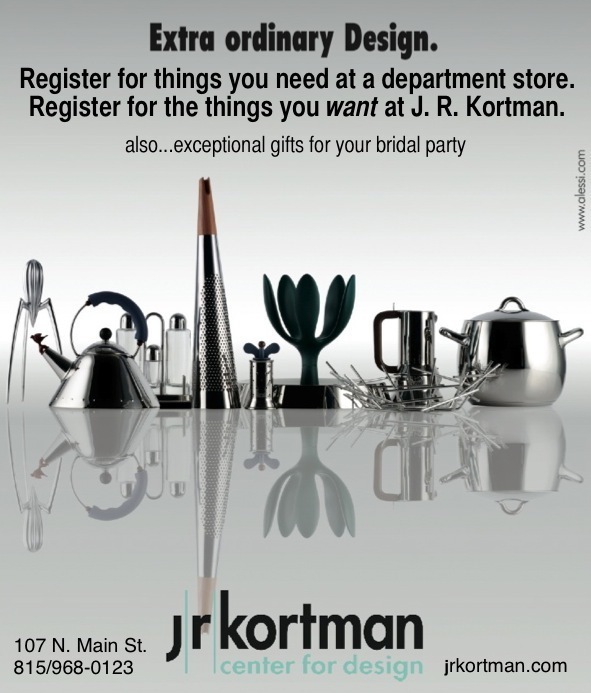