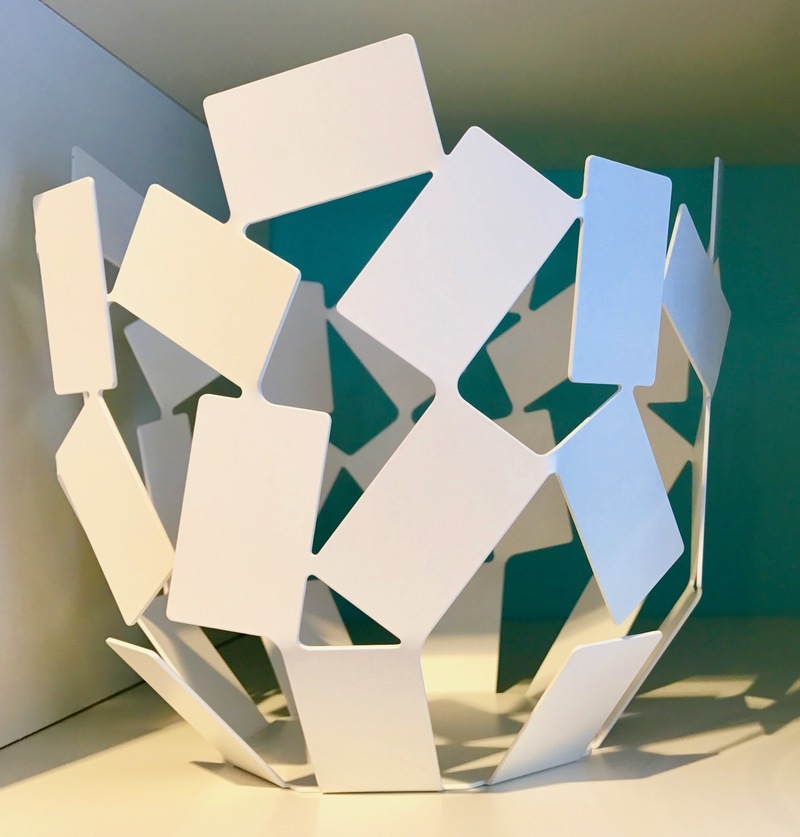 Happy New Year! Save 25% OFF on all Christmas cards and on selected holiday items! 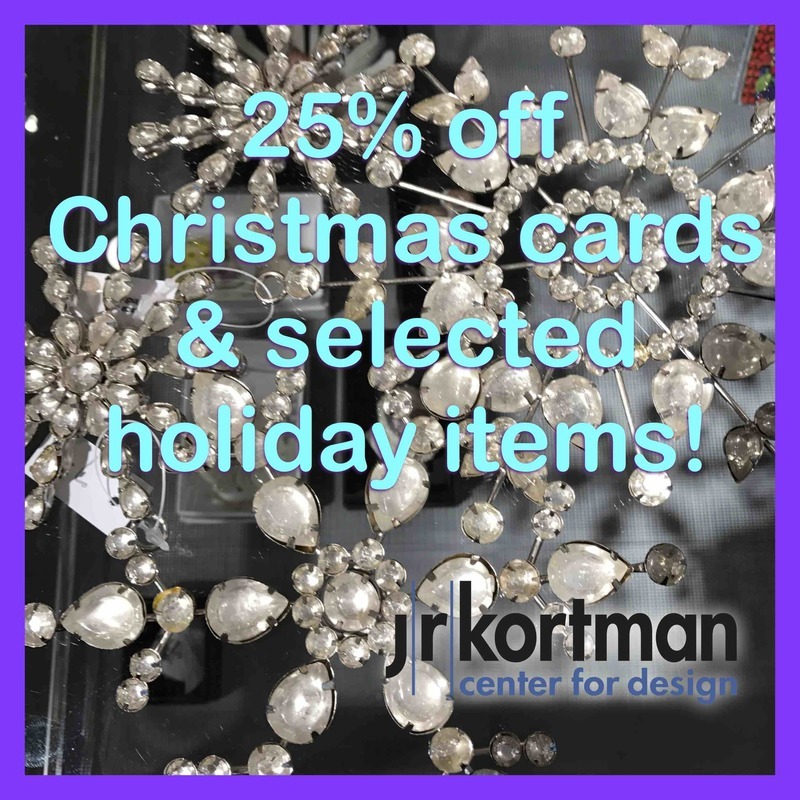 We would like to THANK YOU for making our 31st Christmas so successful, and most of all, so enjoyable!


For this holiday week we will have limited hours:

We will be closed New Year's weekend Saturday (Dec. 31st thru Jan. 2nd)

We will resume normal hours on Tuesday, January 3rd 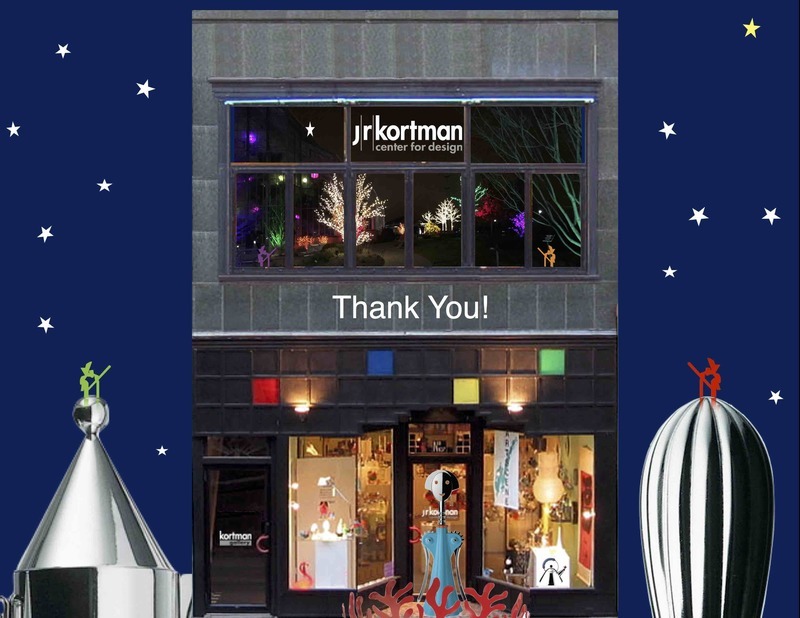 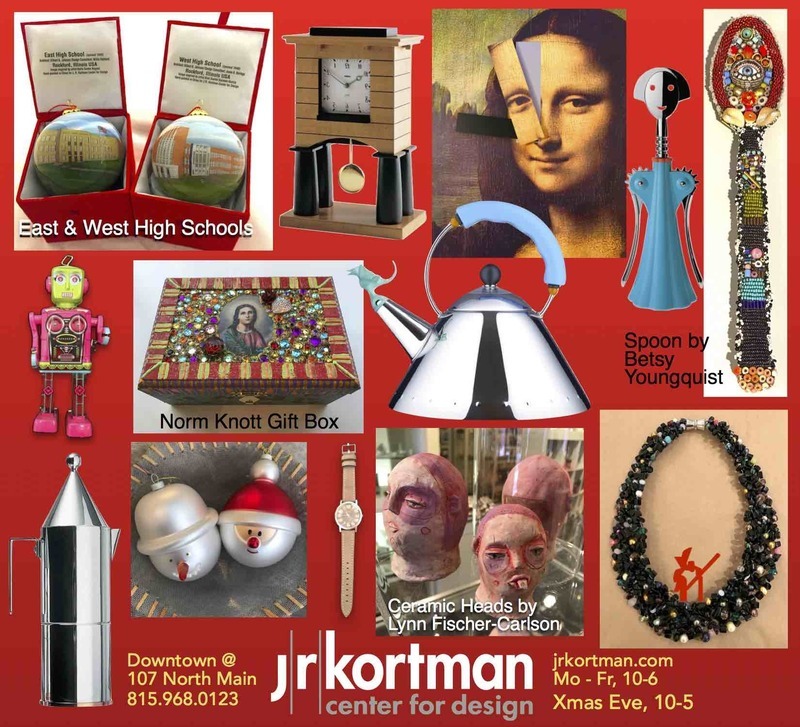 Don't miss the 2nd annual "Naughty or Nice" Holiday Shopping Party!...this Monday, December 19, 6-9pm @ J. R. Kortman Center for Design. It's a fun evening of shopping, and when you make a purchase, find out if you've been naughty or nice, upstairs in the Kortman Gallery! There, you'll get a chance to reach into Santa's grab bag for a fun gift, if you've been nice...or possibly a lump of coal, if you've been naughty. Only you and Santa know for sure! And, of course, bartender Dennis Horton will be serving up some holiday cheer from the Kortman Gallery Bar. Chirstmas shopping has never been this much fun! 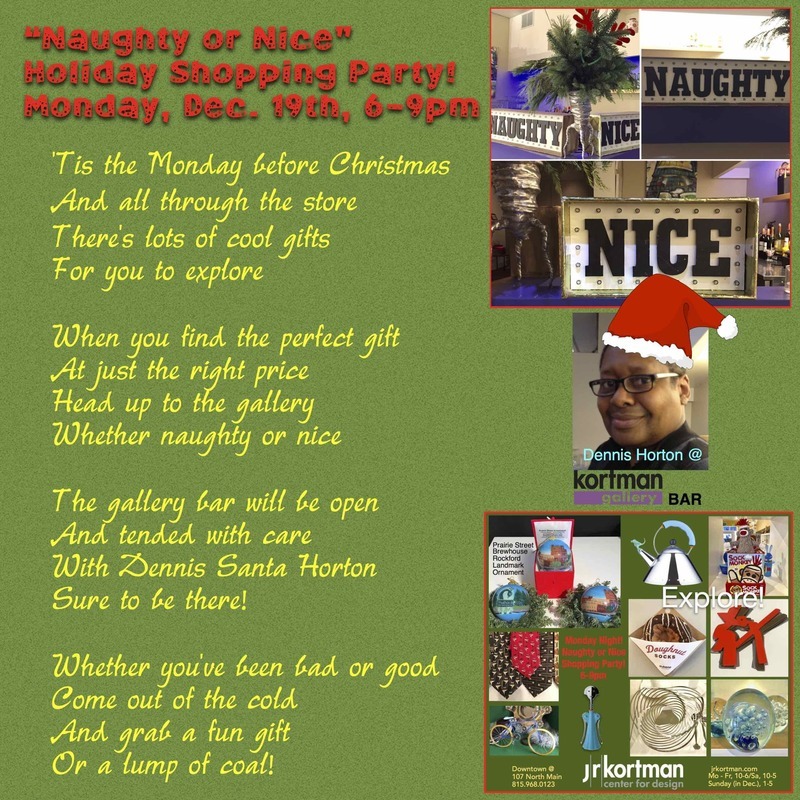 Holiday shopping the way you like it...come in and EXPLORE! 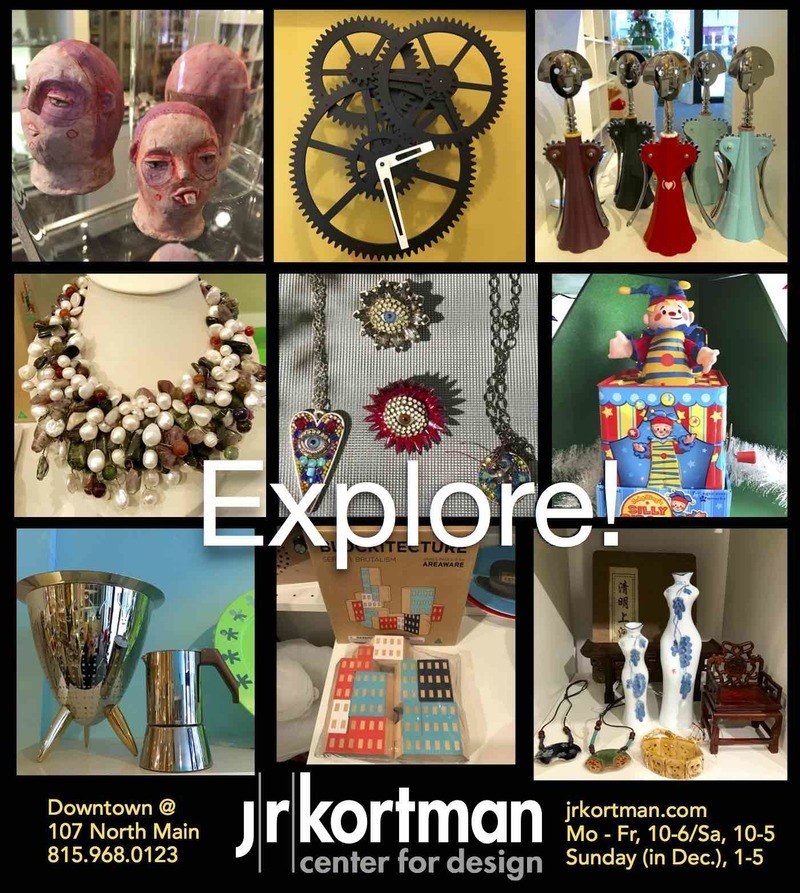 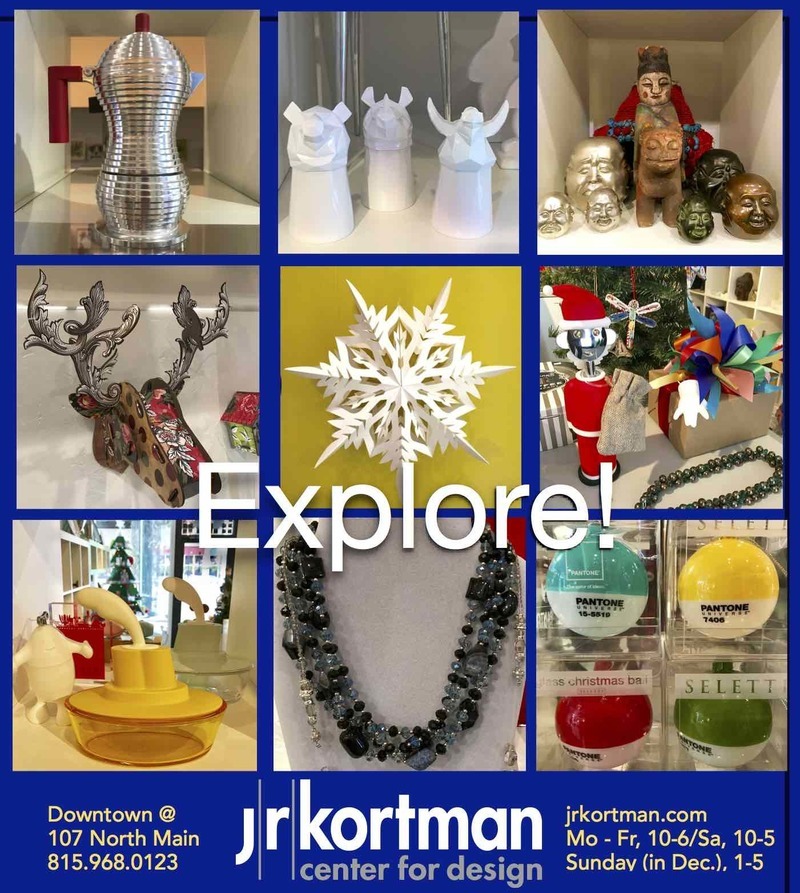 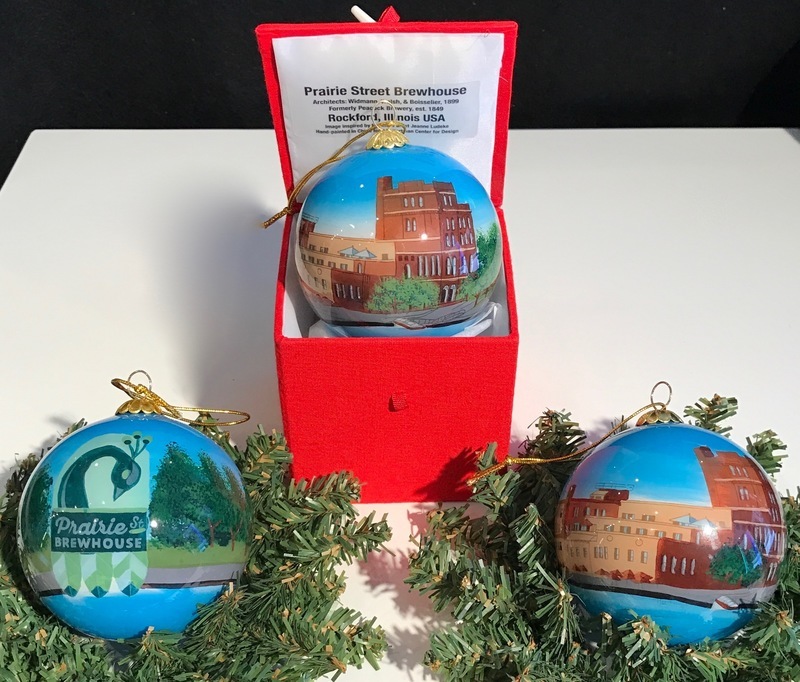 From its humble beginnings in 1847, the brewery built by Johnathan Peacock expanded into the imposing brewhouse building along Rockford’s historic industrial riverfront. After years of abandonment, Lloyd  and Diane Koch acquired the building and spearheaded the development of the the Prairie Street Brewhouse, a mixed use complex that has become a true Rockford Landmark.
The historic Prairie Street Brewhouse has been selected as J.R. Kortman Center for Design’s ornament for 2016 in the Rockford Landmark Ornament Collection.
“When you combine its long downtown history along the Rock River with it’s contemporary use as an extremely popular gathering and event space, the Prairie Street Brewhouse is one of Rockford’s grandest landmarks,” says Doc Slafkosky, co-owner of J. R. Kortman. ‘It’s not only historic architecturally, but it has a special place in a lot people’s hearts, since the Brewhouse hosts weddings, grand parties, and other significant community events.”
The original image for the Brewhouse ornament was a painting created by Rockford artist Jeanne Ludeke.
“We took that image to Beijing where the artist who hand-paints each ornament was able to transpose Jeanne’s painting on the inside of a clear ornament sphere, utilizing an ancient Chinese folk art technique” said co-owner Jerry Kortman. “It’s fascinating to see how our artist communicated visually with the Chinese artist through the language of art.”
The ornament features not only an image of the Brewhouse building, but also the Prairie Street Brewhouse “peacock” logo is painted on the back.
For more than 18 years J. R. Kortman Center for Design has been featuring hand-painted ornaments depicting Rockford landmarks sold year round at the downtown Rockford concept store and gallery.
The Brewhouse ornament is not only available at J. R. Kortman, 107 North Main Street, but can also be purchased at the Prairie Street Brewhouse, 200 Prairie Street, Downtown Rockford
Besides the Brewhouse, the Rockford Landmark Ornament Collection includes East and West High Schools, St. Anthony Church, Blackhawk Statue, “Symbol” sculpture, two views of Frank Lloyd Wright’s Laurent House, a special edition of Memorial Hall,, and the North Main Street Armory. Other ornaments available in the Landmark Collection include, the Beattie Park Gazebo, Sinnissippi Lagoon, the Faust Landmark Building, Coronado, and Midway Theater Buildings, the Woodward Governor building, and the Sinnissippi Burr Oak Tree. Over the past 15 years the “Symbol” ornament has been the best selling ornament in the collection.
“Other top sellers include four ornaments depicting different scenes of the beautiful Anderson Japanese Gardens and Nicholas Conservatory,” says Slafkosky.
In addition to the Swedish Historical Society’s “Erlander Home,” other historic houses in the collection include the  “Limestone Mansion,” home to the Community Foundation of Northern Illinois, and the “Cobblestone House,” located at 2127 Broadway, one of Rockford’s oldest houses.
All the Landmark ornament images are individually hand-painted on the inside of a glass sphere, utilizing an ancient Chinese technique originally applied to “snuff” bottles. Each collectable ornament is a miniature work of art.
For more Info contact Doc or Jerry at 968-0123. 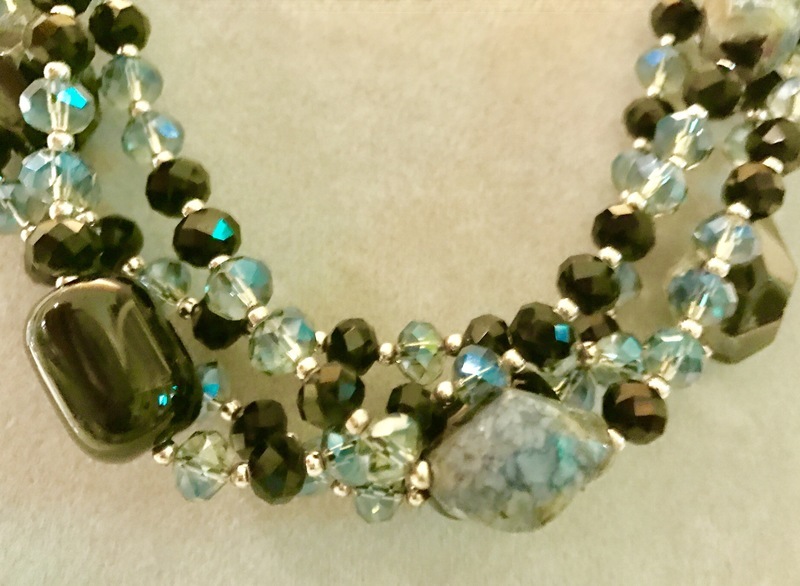 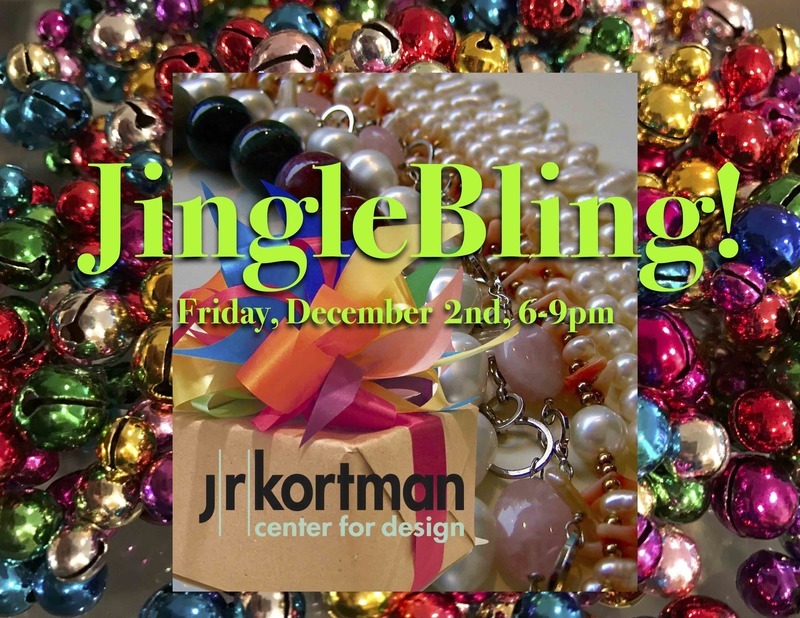 You are invited to JingleBling!…a holiday Jewelry Preview Party, on First Friday, December 2nd, from 6 to 9pm, upstairs in the Kortman Gallery. See the latest designs, many one of a kind pieces that just arrived exclusively for J. R. Kortman from the Pearl markets of Shanghai and Beijing. Our jewelry fashion consultants will be on hand to show and model our exciting, elegant, and festive necklaces, bracelets and earrings that will be great for you to show off this holiday season. And guys, for your holiday gift buying, this is an excellent opportunity to see cool jewelry with the help of our gals who can assist you in selecting just the right piece. And best of all, the Kortman Gallery Bar will be open with bartender Dennis Horton serving up some holiday cheer! This is the way to shop!!!
P.S. At the same time you can see “The Gift Box,” a holiday group exhibition now on display in the Kortman Gallery featuring gift boxes made by 39 of some Rockford’s most accomplished artists. Purchase an artist-made gift box for your jewelry purchase and present her with an unforgettable Christmas gift that she will remember forever!…from J.R. Kortman Center for Design! 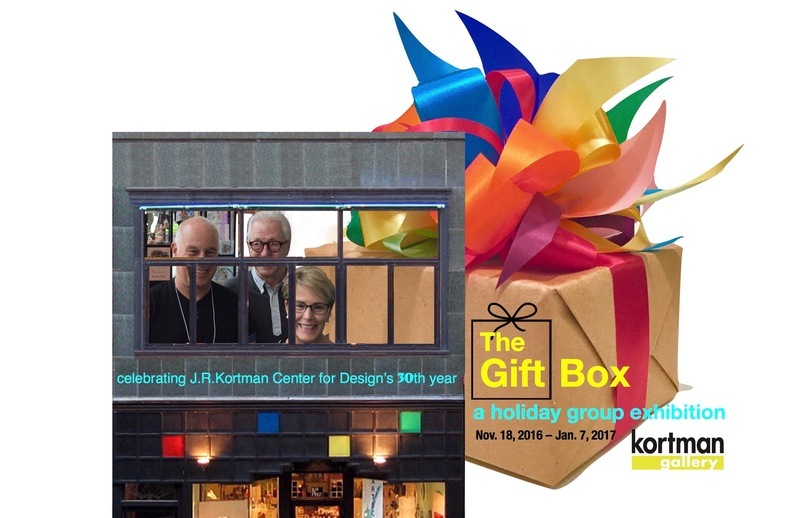 In 1986, Downtown Rockford had been all but abandoned by the retail sector. However, unique architecture, an urban setting, and affordable historic spaces that were left behind, became an attraction to Jerry Kortman and Doc Slafkosky who, with a vision for the future, saw opportunity for their ambitious business concept: a contemporary design store with an upstairs cafe and art gallery.
Today, Downtown Rockford is experiencing a renaissance while J. R. Kortman Center for Design, on November 20th, completes 30 years in business. To celebrate this milestone the Kortman Gallery is presenting a holiday group exhibition, opening Friday, November 18th, featuring art by 37 artists who have created works inspired by the gift box, in recognition of the iconic J. R. Kortman gift wrap.
“For more than a generation, J.R. Kortman has become known for our gift wrap,” says co-owner and gallery director Doc Slafkosky. “The brown craft paper with colorful bows, each hand created by Jerry has added excitement and anticipation to whatever intriguing store purchase may be within this iconic wrap."
“We thought this would be a good theme for our annual holiday group art exhibit upstairs in the Kortman Gallery," says co-owner Jerry Kortman. "So we titled the exhibit ‘The Gift Box' and invited artists to make their version of a gift box, and be true to their own style and art form.”
The result are works in in a variety of media including painting, sculpture, photography, and assemblage by a diverse group of Rockford artists who, over the years, have had solo exhibits in the Kortman Gallery.
The artist featured in “The Gift Box” holiday exhibit are Stephen Warde Anderson, Leslie Arbetman, Michael Bugler, Jesus Correa, Diane Dailing, Michelle DalPra, John Deill, Michelle Dorr, Lynn Fischer-Carlson, Joseph Goral, Joanne Gustafson, Corey Hagberg, Collin Harrison, Drew Helge, Jarrod Hennis, Brian Hierstein, Margret Hesler Hynes, Javier Jimenez, Lisa Jimenez, Pam Kehoe-Peterson, Jeremy Klonicki, Norm Knott, Johnathan Kuss, Britney Lindgren, R. Scott Long, Jeanne Ludeke, David Menard, Val Olafson, Becky Pelley, Ellie Pinzarrone, Paul Pinzarrone, Sarah Reed-McNamara, Cherri Rittenhouse, Una Ryan, Sarah Danielle Stewart, Robert Sunday, Matt Vincent, Kyle Wolfe, and Betsy Youngquist.
The opening reception for the Kortman Gallery exhibit “The Gift Box,” a holiday group exhibition will be Friday, November 18th, 5:30 to 9pm and will be on display through January 7th. Kortman Gallery is located upstairs at J. R. Kortman Center for Design, 107 North Main Street in Downtown Rockford. The exhibition  is free and open to the public. For more information call 815-968-0123...and visit our J. R. Kortman Center for Design Facebook page. 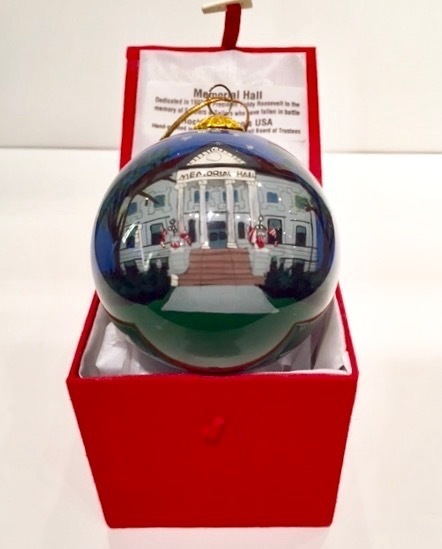