Start off your holiday weekend Downtown First Friday, July 1st, with shopping at J. R. Kortman Center for Design featuring our Blue Dot ﻿Sale with 25% off on selected items. Then relax upstairs in the Kortman Gallery with a refreshing wine cocktail or ice cold beer served up by master bartender Tim Stotz while enjoying the remarkable photographs of Downtown Rockford created by Hans Rupert. You won't want to miss this great exhibit which will be on display through July 31st. 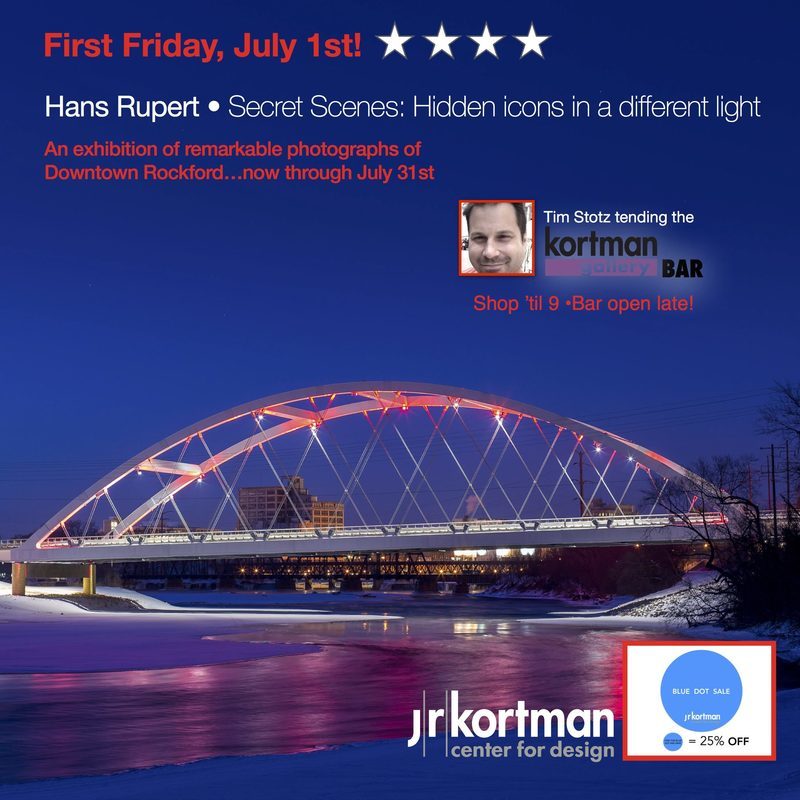 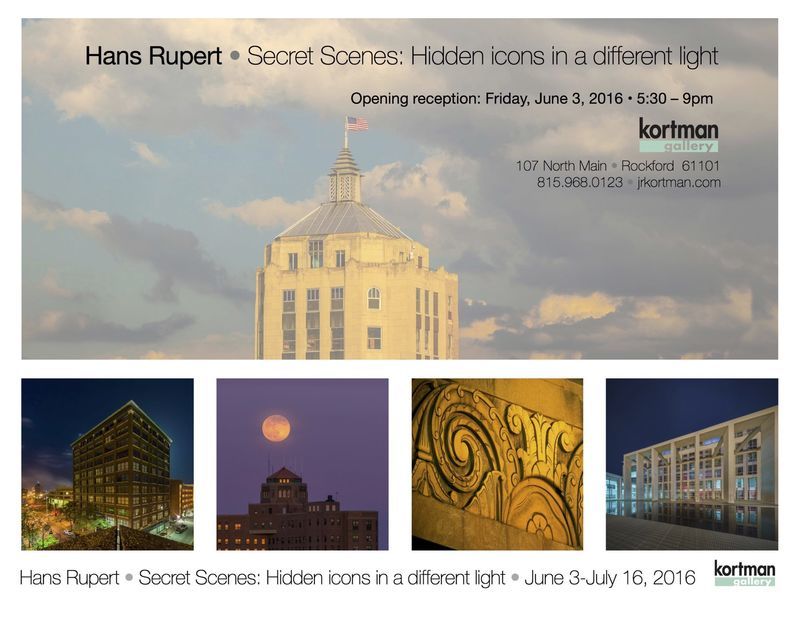 Downtown Rockford is Hans Rupert’s front and backyard, his neighborhood, his workplace, his home. And being a commercial photographer with architectural clients, Rupert has an eye and camera on buildings. With the opportunity of seeing it 24 hours a day, season after season for three decades, the unique architecture of Downtown Rockford has naturally become the subject of Rupert’s stunning and intriguing neighborhood photographs.
On Friday June 3rd, Hans Rupert’s captivating perspective of Downtown Rockford will be presented in “Secret Scenes: Hidden icons in a different light,” an exhibition of photographs will open in the Kortman Gallery.
“Hans starting posting his collection of these elegant photos of Downtown on Instagram and Facebook and that caught our eye,” said Doc Slafkosky, gallerist for the Kortman Gallery. “The light, the colors, and the architectural details in his photos is breathtaking. Hans has stepped out of his commercial field and into the artistic world with these photos.”
“I was surprised when the Kortman Gallery approached me with the idea for an exhibition,” said Rupert. “I have always thought of my photography as a commercial endeavor, and not necessarily art. But, I’m excited and pleased to share my Downtown with everyone.”
In his exhibition title, Rupert refers to “secret scenes” which, in reality, are in plain site, says Slafkosky. “However, you see them from a personal and atmospheric perspective that Rupert was able to capture through detailed familiarity and affection for his neighborhood. Most of us don’t see Downtown in this light.”
Since the mid 1980’s, commercial photographer Hans Rupert has not only  worked, but has lived in Downtown Rockford.  Studio space was affordable as was living space. In the late ’90’s Rupert acquired the Bliss Building on Mulberry Street where he and his wife, Amy are raising their two children. He is a graduate of Rockford University and owner of noir.net, his photography business.
The Kortman Gallery exhibit “Secret Scenes: Hidden icons in a different light,” photographs by Hans Rupert will open First Friday, June 3rd, 5:30 to 9pm. It will be on display through July 16th. Kortman Gallery is located upstairs at J. R. Kortman Center for Design, 107 North Main Street in Downtown Rockford. For more information call 815-968-0123. 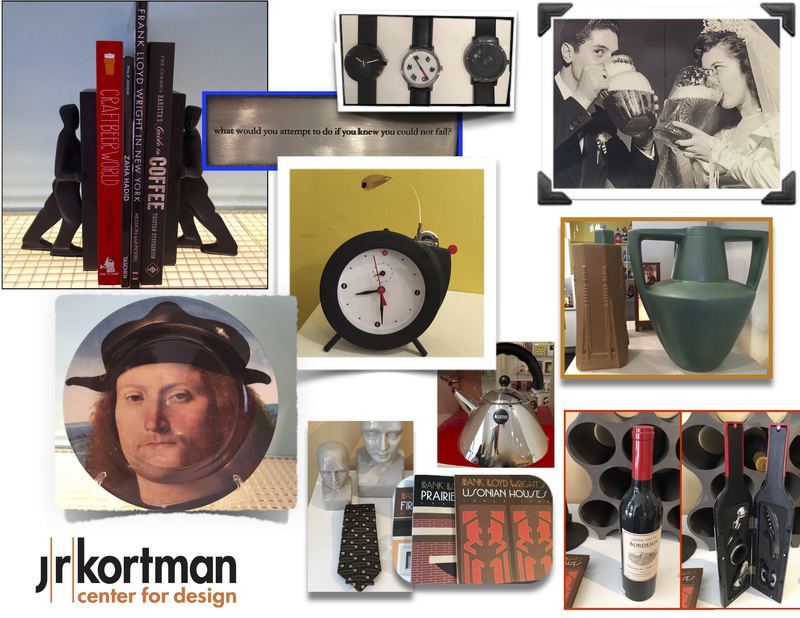 Here are contemporary, yet classic, pieces that would add an elegant, and even whimsical accent to your home...also ideas for graduation, Father's Day, and Spring weddings...Japanese zinc Crane Vase, the beautiful wood and lacquer Michael Graves mantle clock with swinging pendant, and ceramic Einstein bank... 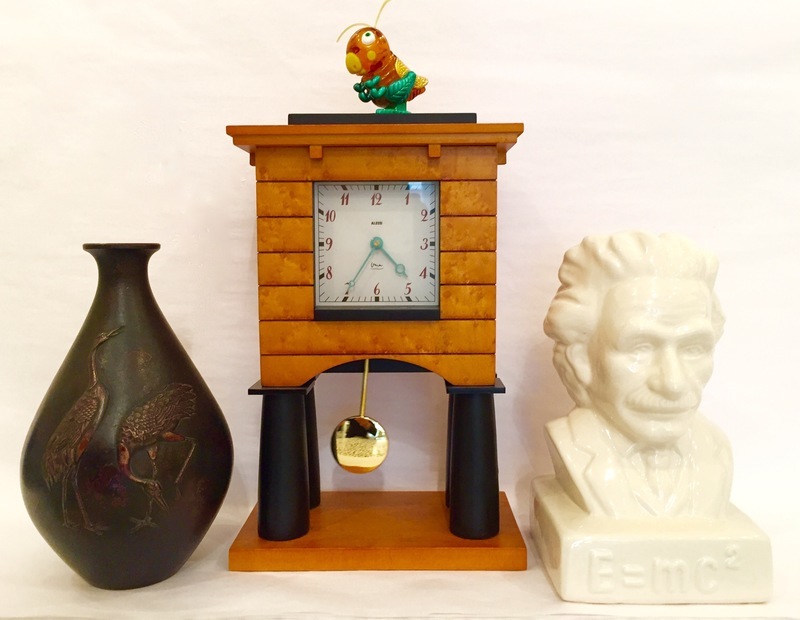 Remember Mom on Mother's Day, May 8th with something sweet or something fun, or something exceptional that she'll treasure forever from J.R. Kortman Center for Design... 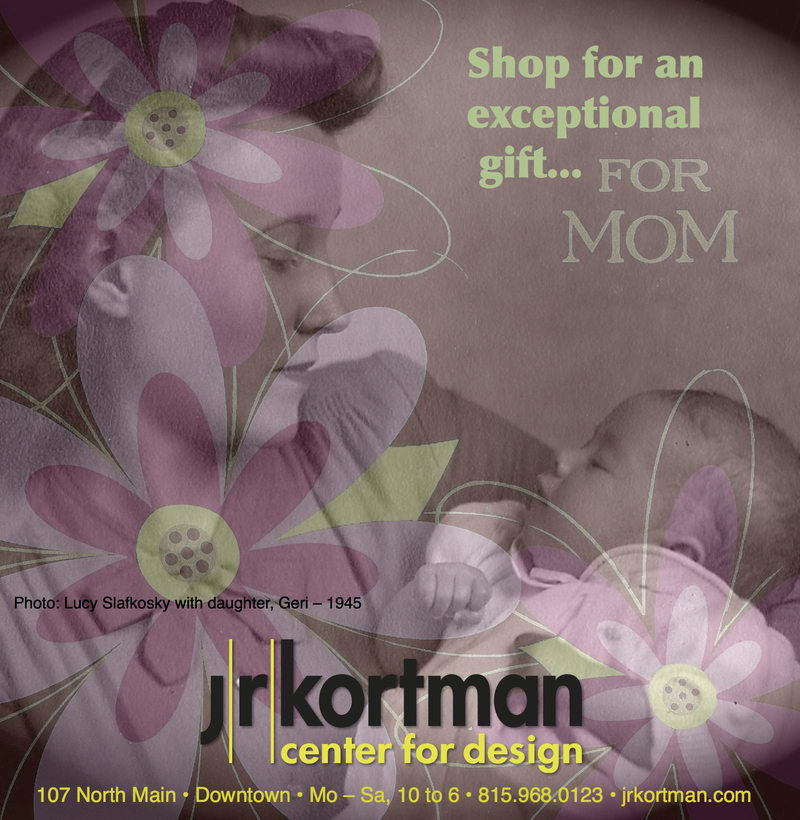 The Mas Tequila Review and the Kortman Gallery present another poetry open mic in downtown Rockford on Friday, April 22nd. The theme is Earth Day. Rockford poets and the general public are invited to come together as we celebrate restoring and maintaining the planet we live on and the environment we live in. Sign up to read your favorite Earth Day related poem, and also share one of your original works. Sign-up begins at 7:30 pm. Limited to the first 15 readers, additional readers if time permits.The readings are hosted by Richard Vargas.
Free to the public. The bar will be open with Bartender Tim Stotz mixing up a special Kortman Gallery Bar wine cocktail!. 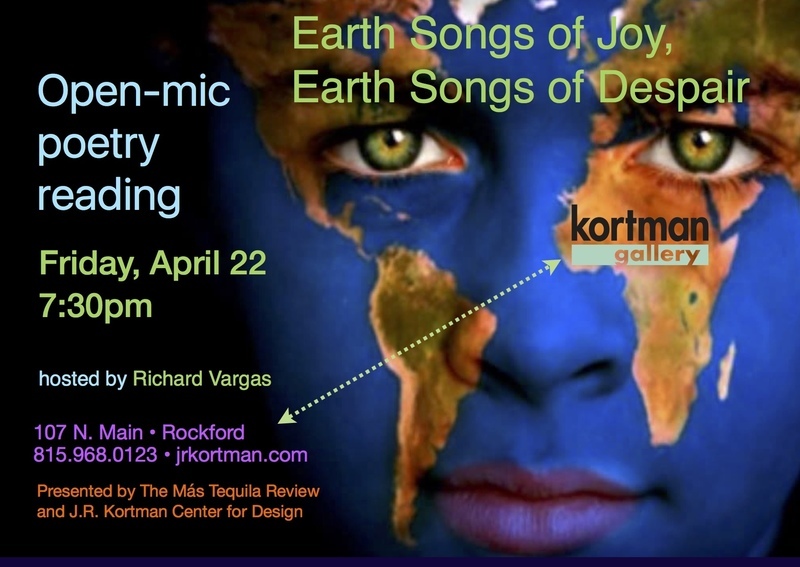 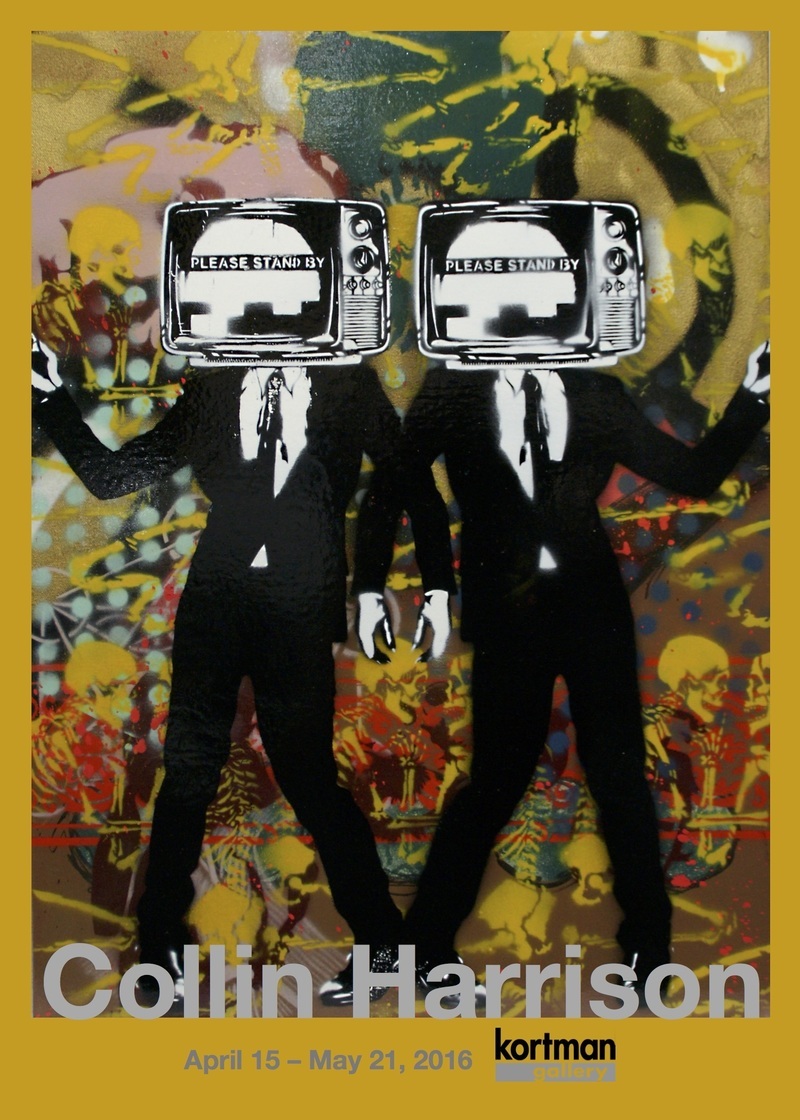 In the early days of TV broadcasting it wasn’t uncommon to see the phrase, “Please Stand By” on your television screen. It was a way of holding your attention until the next image, event, or broadcast appeared on your screen.
Rockford artist Collin Harrison has titled his Kortman Gallery exhibit, “Please Stand By” to emphasize his fascination with the layers of visual history that surrounds us not only though electronic media, but also in graffiti, where artists push themselves to the forefront of the conversation by painting over already existing work.
“I try to channel the visual noise in graffiti into the backgrounds of my work with many different layers of images, colors, and textures while leaving a stark
black & white focal stenciled image that pushes itself out of that noise,” said Harrison.
“I use natural, spiritual, and pop culture iconography to explore the things people go to outside of themselves for information and guidance, namely, religion and the modern media,” writes Harrison in his artist’s statement.
“Collin’s art does emulate the visual language of graffiti artists, but utilizes a refined technique of layering images with stenciling and spray paint to create colorfully complicated, sophisticated paintings that are a feast for the eyes,” says Kortman Gallery director Doc Slafkosky.
Collin Harrison is a twenty-four year old Rockford native and student of
printmaking/graphic design. A graduate of the Auburn High School CAPA program,
and received his Associate of Arts from Rock Valley College. Harrison is now a senior BFA student at Rockford University. Previously, his work has been on display in collective Art Scene exhibitions, in his college literary magazines, as well as in the emerging artist booth at Rockford Art Museum’s Greenwich Village Art Fair.
The Kortman Gallery exhibit “Please Stand By” by Collin Harrison will open in conjunction with Spring  ArtScene, Friday, April 15th, 5 to 10pm and Saturday, April 16th, 10am to 9pm. It will be on display through May 21st. Kortman Gallery is located upstairs at J. R. Kortman Center for Design, 107 North Main Street in Downtown Rockford. For more information call 815-968-0123.

The first day of Spring and Easter are just around the corner. Celebrate with gifts that capture the colors and spirit of the season and Easter holiday. Here are some decorative, and even functional gift ideas for filling your Easter and Spring baskets. 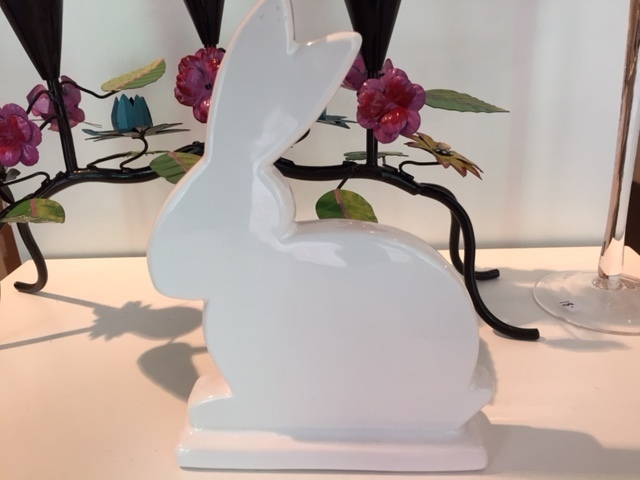 There's still something special about seeing great images in print! The "coffee table" book is a great way to appreciate beautiful photography, architecture, and art with something that is a part of your home experience that's tactile, permanent, and stimulating. J. R. Kortman has an intriguing selection of books from Taschen, Workman, Abrams, Pomegranate Press, and other fine publishers of collectible books. 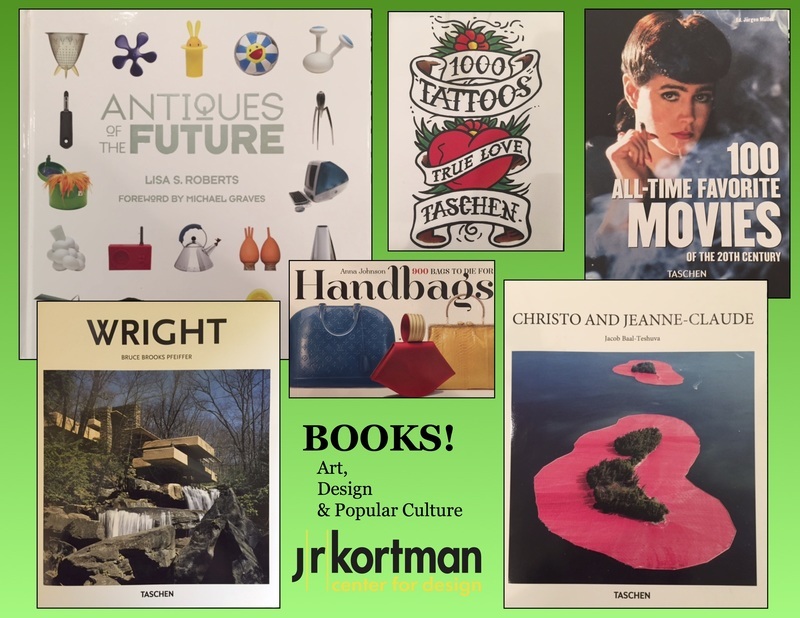 The Más Tequila Review and J.R. Kortman Center for Design are collaborating to bring poetry back to downtown Rockford. An open mic celebrating the poetry of one of the country's most prolific poets, Charles Bukowski, who died March 9, 1994, will be emceed by poet and editor, Richard Vargas. Participants are asked to read their favorite Bukowski poem, and an original poem of their own. Sign up for the open mic will begin at 7:30 PM, and is limited to the first 15 readers. (Additional readers will be considered if time permits.) Reading will commence at 8:00 PM. Admission is free and open to the public.
Various poetry stuff will be raffled during the event, provided by The Más Tequila Review . 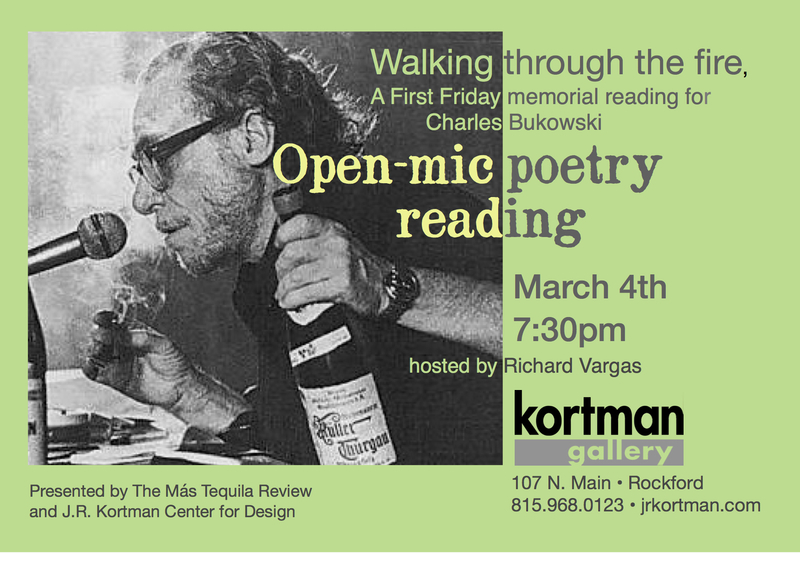