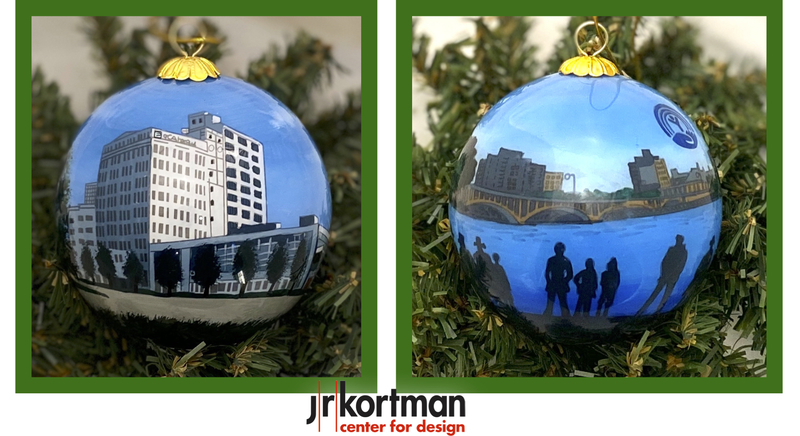 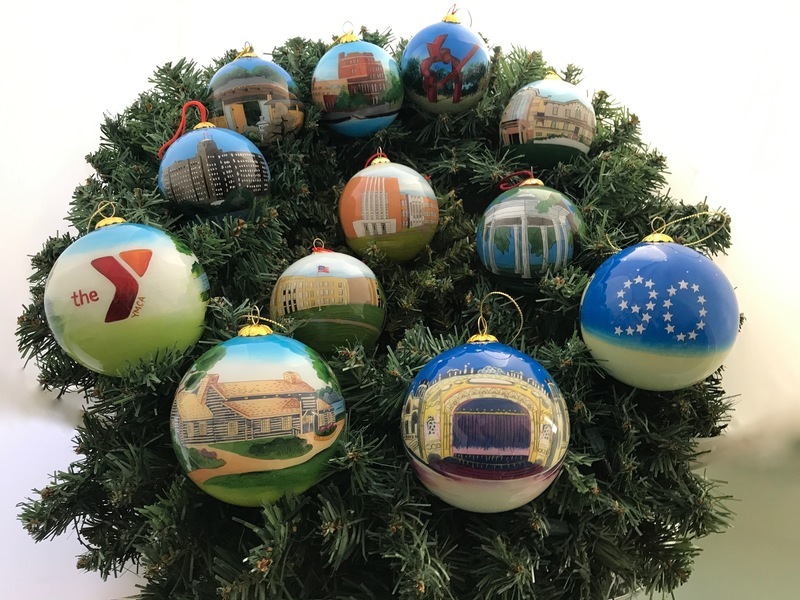 J.R. Kortman Center for Design introduces two new ornaments to the Rockford Landmark Ornament Collection for 2019. One features the new Embassy Suites Hotel in the historic Ziock/Amerock building,  and the other, a view of the Rock River with the Jefferson Street Bridge. The ornament celebrates the United Way of the Rock River Valley’s 100th anniversary.
“The Ziock/Amerock Building has been a part of the Rockford downtown skyline for over 100 years” says Fred DeLaRosa, General Manager of the new Embassy Suites Hotel. “The long-anticipated hotel, opening in April of 2020, will be an exciting addition to Rockford’s downtown cultural life. This ornament represents not only a landmark of the past, but also the future.”
The second new ornament for 2019, commissioned by the United Way of the Rock River Valley features a view of the Jefferson Street Bridge and the west bank of the Rock River. Also depicted are shadowed figures representing generations of Rockford people who have supported and been helped by the United Way for the past 100 years. The image is based on an original painting by Rockford artist Patricia Burkholder.
“We took images of the hotel and the river scene painting to Beijing where the artist who hand-paints each ornament was able to transpose them on the inside of a clear ornament sphere, utilizing an ancient Chinese folk art technique” said J.R. Kortman co-owner Doc Slafkosky. “It’s fascinating to see how our artist communicated visually with the Chinese artist through the language of art.”
For more than 20 years J. R. Kortman Center for Design has been featuring hand-painted ornaments depicting Rockford landmarks, sold year round at the downtown Rockford concept store and gallery.
Besides the Embassy Suites Hotel and United Way river scene ornaments, the Rockford Landmark O.rnament Collection includes YMCA Log Lodge and Coronado  Stage, the Prairie Street Brewhouse, East and West High Schools, St. Anthony Church, Blackhawk Statue, “Symbol” sculpture, two views of Frank Lloyd Wright’s Laurent House, a special edition of Memorial Hall,, and the North Main Street Armory. Other ornaments available in the Landmark Collection include, the Beattie Park Gazebo, the Faust Landmark Building, Coronado and Midway Theater Buildings, the Woodward Governor building, and the Sinnissippi Burr Oak Tree.  Over the past 15 years the “Symbol” ornament has been the best selling ornament in the collection.
“Other top sellers include four ornaments depicting different scenes of the beautiful Anderson Japanese Gardens and Nicholas Conservatory,” says Slafkosky.
In addition to the Swedish Historical Society’s Erlander Home, other historic houses in the collection include the  “Limestone Mansion,” home to the Community Foundation of Northern Illinois, and the “Cobblestone House,” located at 2127 Broadway, one of Rockford’s oldest houses.
The ornaments are available for $25 exclusively at J.R. Kortman Center for Design, 107 North Main Street, Downtown Rockford