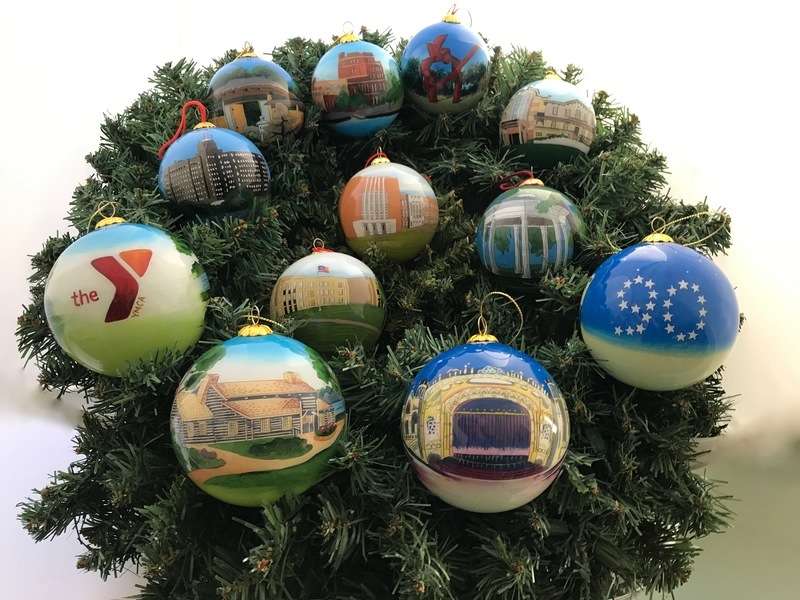 J.R. Kortman Center for Design introduces two new ornaments to the Rockford Landmark Ornament Collection for 2017, the historic YMCA Log Lodge and a special edition of the Coronado Performing Arts Center, celebrating the theatre’s 90th year.
“We are honored the Log Lodge was chosen as one of our community’s assets to highlight,” said Michelle Gorham, Chief Advancement Officer, YMCA of Rock River Valley. “Throughout 70 years, this building has played host to many celebrations from weddings to baby showers and more. Community members have made lasting memories in the Log Lodge and we are excited to honor those moments with this ornament.”
“The Y Log Lodge is one of Rockford’s most intriguing and unusual landmarks,” says Doc Slafkosky, co-owner of J.R. Kortman. “In a way, you could say it’s hidden in plain sight, yet has such a great history and potential for future use because of its beautiful location along the Rock River.”
The Coronado ornament features a beautiful hand-painted image of the the theater’s interior with it’s spectacular proscenium. The back of the ornament has the number “90” painted with stars representing the theater’s starlit ceiling.
The original image for the Y Log lodge ornament was a commissioned painting created by Rockford artist Jeanne Ludeke and the Coronado was based on an image by Rockford illustrator Dean Munson. Both ornaments are limited edition deluxe versions, hand-painted inside larger glass spheres than previous ornaments and presented in a elegant midnight blue velvet gift box. The cost is $28. each.
“We took those images to Beijing where the artist who hand-paints each ornament was able to transpose them on the inside of a clear ornament sphere, utilizing an ancient Chinese folk art technique” said co-owner Jerry Kortman. “It’s fascinating to see how our artist communicated visually with the Chinese artist through the language of art.”
For more than 19 years J. R. Kortman Center for Design has been featuring hand-painted ornaments depicting Rockford landmarks sold year round at the downtown Rockford concept store and gallery.
The Log Lodge ornament can also be purchased at all three YMCA facility locations. A portion of the proceeds from the sale of the ornament at YMCA locations will help with renovation costs of the Log Lodge. Updates will include exterior renovations, log repair, lighting, flooring, windows and more.
Besides the Log Lodge and Coronado “90” ornaments, the Rockford Landmark Ornament Collection includes the Prairie Street Brewhouse, East and West High Schools, St. Anthony Church, Blackhawk Statue, “Symbol” sculpture, two views of Frank Lloyd Wright’s Laurent House, a special edition of Memorial Hall,, and the North Main Street Armory. Other ornaments available in the Landmark Collection include, the Beattie Park Gazebo, the Faust Landmark Building, Coronado, and Midway Theater Buildings, the Woodward Governor building, and the Sinnissippi Burr Oak Tree.  Over the past 15 years the “Symbol” ornament has been the best selling ornament in the collection.
“Other top sellers include four ornaments depicting different scenes of the beautiful Anderson Japanese Gardens and Nicholas Conservatory,” says Slafkosky.
In addition to the Swedish Historical Society’s Erlander Home, other historic houses in the collection include the  “Limestone Mansion,” home to the Community Foundation of Northern Illinois, and the “Cobblestone House,” located at 2127 Broadway, one of Rockford’s oldest houses.
All the Landmark ornament images are individually hand-painted on the inside of a glass sphere, utilizing an ancient Chinese technique originally applied to “snuff” bottles. Each collectable ornament is a miniature work of art.
For more Info contact Doc or Jerry at 968-0123.