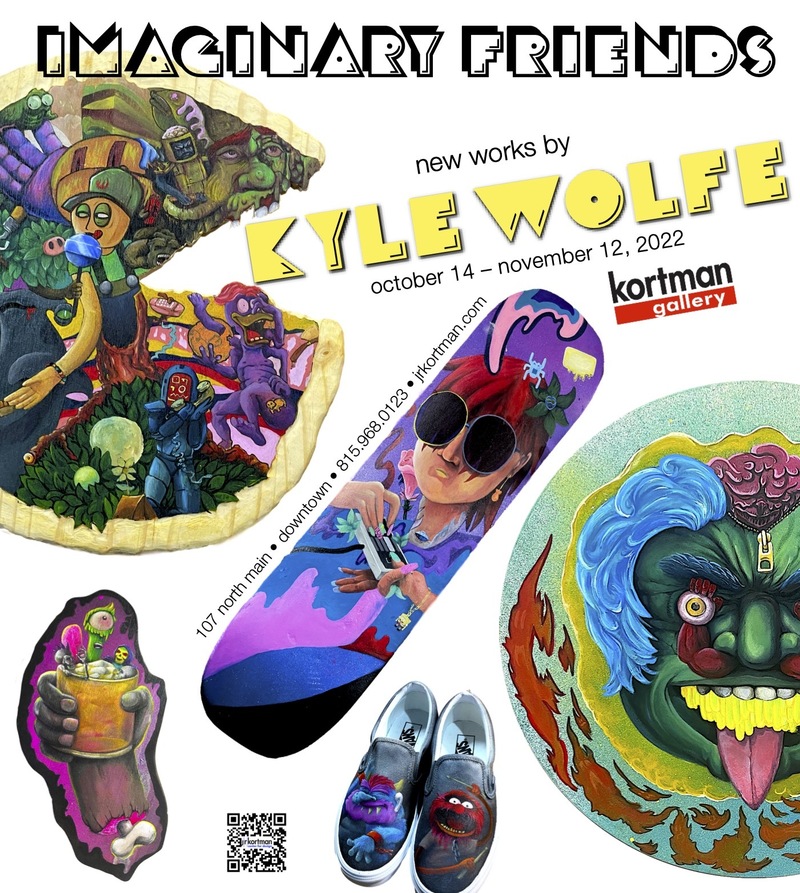 Growing up, Kyle Wolfe was always attracted to visually charged toys, video games, comics, and pop culture objects from the past. With a natural talent for art, he cultivated his artistic talent and curiosity that lead to a career not only as a multimedia visual artist, but an art educator.
On Friday, October 14th Wolfe brings his extraordinary visual, interactive new works to the Kortman Gallery in an exhibit he calls, “Imaginary Friends.” The opening receptions, coincide with this year’s ArtSene weekend on Friday, October 14 from 5-9pm and  and Saturday, October 15, 4- 9pm.
Wolfe’s imaginative, innovative exhibit includes painting with acrylics or oil, on recently rediscovered found objects from his past like skateboards, shoes, and even telephone. His attraction to comics, video games and the visual culture of his youth is also the inspiration for digital and print work that will also be featured in this exhibit.
“My approach to creating has always been evolving,” says Wolfe. “I’m at point in my career where I feel the freedom to create in any way that moves me. This show has given me the opportunity to let go of control and express myself in multiple media utilizing anything that inspires me to become my canvas.”
Since his personal relationship to the imagery of pop culture was such an important part of his early life, he relates to his newly created visual images as his “imaginary friends.” Some of his art makes references to known characters like Pac-man, Muppets characters, etc. while other creatures in his eye-popping, colorful works are pure fantasy.
Many of his pieces will include an interactive QR code along side that will enhance and engage the viewers experience.
“This is going to be a fun and entertaining exhibit for all ages,” said Doc Slafkosky, Kortman Gallery director. “This is not just paintings on the wall. You will have a great time exploring the imagination and creative spirit of this expressive and inspired artist.”
This is Kyle Wolfe’s second solo exhibit in the Kortman Gallery. His first show in 2010 featured digital works called “A Thousand Words” creating images from visual fragments he created on the computer. Wolfe, a graduate of Northern Illinois University, teaches art in the Rockford Public Schools at Roosevelt High School.
“Imaginary Friends,” new works by Kyle Wolfe opens Friday, October 14th from 5 to 9pm and Saturday, October 15th from 4 to 9pm upstairs in the Kortman Gallery, 107 North Main Street in Downtown Rockford. His exhibit will run through November 12th. J.R. Kortman Center for Design & Kortman Gallery are openTuesday to Friday, 11am to 6pm and Saturdays, 11 to 5pm. For more information visit www.jrkortman.com of phone 815-968-0123