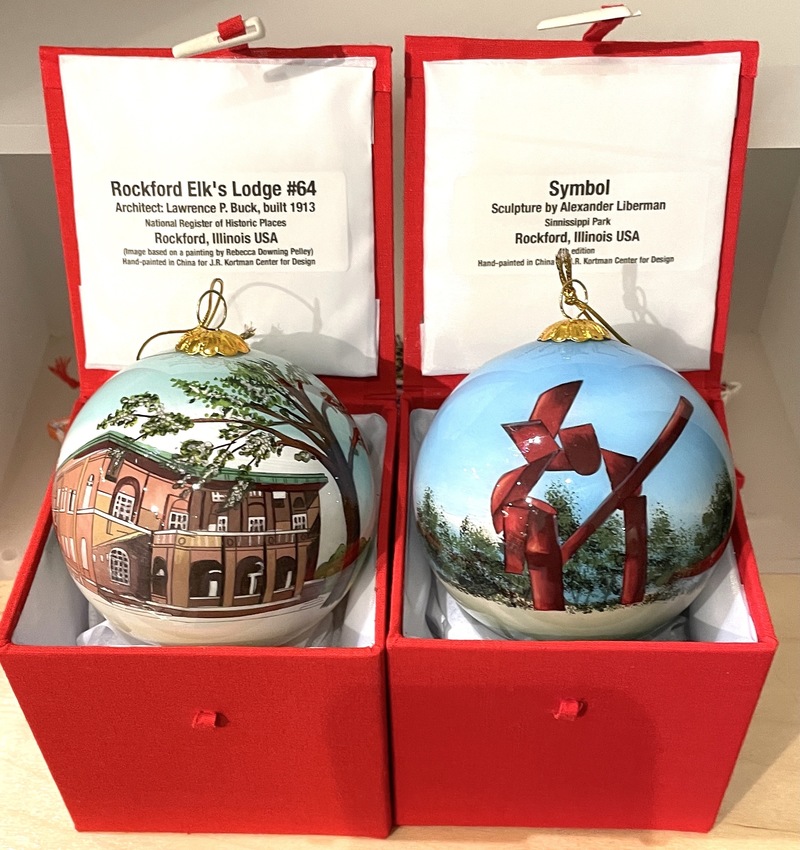 The historic downtown Elk’s Lodge #64, which is listed on the National Register of Historic Places, has been selected as the new addition to the hand-painted Rockford Landmark Ornament Collection for 2021 at J.R. Kortman Center for Design.
The building, which stands on the corner of North Main and Jefferson Streets, was built in 1913 and designed by the successful and influential Chicago architect Lawrence. P. Buck.
“The beautiful and endangered downtown Elk’s Club is not only a local landmark, but is is one of America’s treasures,” says Doc Slafkosky, co-owner of J. R. Kortman. “The building’s architecture is definitely  inspired by the Arts and Crafts movement that took place around the turn of the 19th to 20th century.”
The Elk’s Club ornament image was based on a painting by Rockford artist Rebecca Downing Pelley who was inspired by a 1920’s vintage post card of the building.
Also added this year in the Landmark collection is a new edition of Symbol sculpture by Alexander Liberman,
“The Rockford “Symbol” in Sinnissippi Park along the river is by far the best selling ornament of all other buildings and places that have been made  into ornaments since we started commissioning them back in 1997,” said Jerry Kortman. “It really has become Rockford’s definitive landmark!”
Besides the Elk’s Club and the new Symbol, other ornaments in the collection include  the Rockford Armory, which is also a National Landmark along with two different ornaments of the Coronado Performing Arts Center.
Rockford Landmark Ornament Collection also includes the Embassy Suites Hotel, Prairie Street Brewhouse, East and West High Schools, St. Anthony Church, two views of Frank Lloyd Wright’s Laurent House, a special edition of Memorial Hall, the Beattie Park Gazebo, the Faust Landmark Building, the “Y” Log Lodge, Burpee Natural History Museum, Anderson Gardens, and Midway Theater Building.
In addition to the Swedish Historical Society’s Erlander Home, other historic houses in the collection include the  “Limestone Mansion,” home to the Community Foundation of Northern Illinois, and the “Cobblestone House,” located at 2127 Broadway, one of Rockford’s oldest houses.
All the Landmark ornament images are individually hand-painted on the inside of a glass sphere, utilizing an ancient Chinese technique originally applied to “snuff” bottles. Each collectable ornament is a miniature work of art.