The Burpee Natural History Museum has been selected as this year’s addition to the Rockford Landmark hand-painted ornaments collection from J. R. Kortman Center For Design. Also new this year is a  second-edition version of the Nicholas Conservatory under construction in Sinnissippi Park.
“Burpee Museum and it’s famous resident Jane the dinosaur are certainly dominant landmarks, contributing greatly to Rockford’s cultural vitality,” said Doc Salfkosky, co-owner of J.R. Kortman Center for Design.
“The limited edition glass ornament features an impressive hand-painted image of the North Main Street museum building along with the “Jane” logo,” Slafkosky said. “The ornament is available not only at J.R. Kortman Center for Design, but also at the Burpee Museum where proceeds will benefit this wonderful and dynamic institution.”
“We had another edition of the Nicholas Conservatory created because of popular demand. The excitement is mounting since the spectacular superstructure of the conservatory is now a part of our river front landscape,” says Slafkosky.
The Downtown Rockford design store/gallery has been creating new ornaments every year for more than decade.
Also in the collection is a special edition of Memorial Hall, the Woodward Governor building, and the North Main Street Armory. Other ornaments available in the Landmark Collection include “Guardians of the Rock” Sculpture by Theresa Agnew, the Beattie Park Gazebo, Sinnissippi Lagoon, the Rockford News Tower, the Faust Landmark Building, Coronado, and Midway Theater Buildings, and the Coronado stage, Sinnissippi Bur Oak tree, Old City Hall, and “Symbol” sculpture, the best selling ornament in the collection.
“Other top sellers include four ornaments depicting different scenes of the beautiful Anderson Japanese Gardens,” says Salfkosky. “They are also available at the Anderson Gardens gift shop and restaurant.”
In addition to the Swedish Historical Society’s “Erlander Home,” other historic houses in the collection include the  “Limestone Mansion,” home to the Community Foundation of Northern Illinois,  and the “Cobblestone House,” located at 2127 Broadway, one of Rockford’s oldest houses.
All the Landmark ornament images are individually hand-painted on the inside of a glass sphere, utilizing an ancient Chinese technique originally applied to “snuff” bottles. Each collectable ornament is a miniature work of art.  All ornaments are priced at $22 to $25 each. 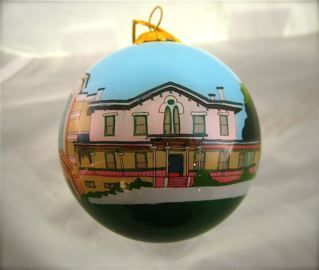